This page provides detailed and real-time coverage on cybersecurity and peace and security negotiations at the United Nations.

The use of cyberattacks by states – and, more generally, the behaviour of states in cyberspace in relation to maintaining international peace and security – is moving to the top of the international agenda.

Historically, as you can consult further down, the basis for cybersecurity at the UN was laid by the work of the UN Group of Governmental Experts (UN GGE) between 2004 and 2021. Currently, the focus is on the work of the UN Open-Ended Working Group (OEWG) on Developments in the Field of Information and Telecommunications in the Context of International Security.

In November 2022, the First Committee of the UNGA adopted a resolution on the programme of action (PoA) on cybersecurity, which proposes to establish a PoA as a permanent, inclusive, action-oriented mechanism after the OEWG 2021-2025 ends.

The following steps: The OEWG will hold its fourth substantive session on 6-10 March 2023 in New York, the USA.

For most recent updates, consult the menu to the right.

To learn more about risks of cyber conflict, global negotiations on cyber-norms and the framework of responsible behaviour, and cyber diplomacy, enrol on our Cybersecurity Diplomacy online course.

In December 2020, the OEWG was renewed for 2021-2025 (A/RES/75/240). The OEWG started its second mandate (2021–2025) with the organisational session held in June 2021. After the three substantive sessions of the OEWG held in December 2021, April and July 2022, the main stumbling stone remains the participation of non-state stakeholders in the OEWG process. Despite tensions due to the war in Ukraine, some progress in confidence-building measures and capacity building was made. At the third substantive session, held in July 2022, delegations reached a compromise on the Annual Progress Report, which will serve as a roadmap for further negotiations.

Timeline
The group started its work on 1 June 2021 with an organisational session. Its first substantive session was scheduled for December 2021, followed by the second substantive session, 28 March-1 April 2022, and the third substantive session, 25-29 July 2022. Its fourth and fifth substantive sessions are scheduled for 6-10 March and 17-21 July 2023, respectively.
Participation
The composition is declared as open, allowing all UN member states that express a desire to participate. In addition, the first OEWG held consultative meetings with interested parties – businesses, non-governmental organisations, and academia. Applications were managed by UNODA and approved on a ‘no objection’ basis (i.e. objections by the governments). It remains to be seen how stakeholders will be included in the discussions of the second OEWG. Ambassador Burhan Gafoor of Singapore was elected, by acclamation, as the Chair of the second OEWG.
Our reports and blogs
A team of GIP rapporteurs followed the discussions at the OEWG and produced detailed reports and blogs from:

Co-proposed by 40 states, a Programme of Action (PoA) for advancing responsible state behaviour in cyberspace would establish ‘a permanent UN forum to consider the use of ICTs by States in the context of international security’. The proposal suggests the PoA to be in a single, long-term, inclusive, and progress oriented format; its implementation and follow-up measures could be subsequently endorsed by the UN GA.

In November 2022, the First Committee of the UNGA adopted a resolution on the programme of action (PoA) on cybersecurity.

The PoA will be established after the OEWG 2021-2025 as a permanent, inclusive, action-oriented mechanism. It will:

The resolution also requests that the Secretary General seek the views of UN member states on the scope, structure and content for the PoA, and the preparatory work and modalities for
its establishment, including at an international conference.

It was adopted by a recorded vote of 157 in favour to 6 against (China, Democratic People’s Republic of Korea, Iran, Nicaragua, Russian Federation, Syria), with 14 abstentions.

Despite long-running discussions and several consensus reports, there are a number of issues that remain open.

It was tasked to continue to develop the rules, norms, and principles of responsible behaviour of states, discuss ways for their implementation, and study the possibility of establishing regular institutional dialogue with broad participation under the auspices of the UN. In March 2021, the OEWG 2019/2020 concluded with its third and final substantive session, in which the group adopted its final report, Chair's summary, and an updated procedural report.

The OEWG 2019/20 started its work on 3-4 June 2019, with an organisational meeting that gathered representatives of almost 100 member states. Its first substantive session was scheduled for 9-13 September 2019. It was followed by the intersessional consultative meeting on 2-4 December 2019, a second substantive session 10-14 February 2020, and the final substantive session 8-12 March 2021.

The composition is declared as open, allowing all UN member states that express a desire to participate. In addition, the first OEWG held consultative meetings with the interested parties – business, non-governmental organisations, and academia. Applications were managed by UNODA and approved on a ‘no objection’ basis (i.e. objections by the governments). It remains to be seen how stakeholders will be included in the discussions of the second OEWG.

Ambassador Jürg Lauber of Switzerland was elected as the Chair of the first OEWG.

The UN GGE is composed ‘on the basis of equitable geographical distribution’. Traditionally, the five permanent members of the Security Council have a seat on all GGEs, and the remaining seats are allocated by grouping. Upon the call for expression of interests, States send an official request for a seat on a GGE of particular interest to them, and might even lobby at the highest levels of the Secretariat for a place at the table.

Once the countries have been identified and notified, they are asked to nominate an expert to participate in the GGE. In almost all cases, these experts are government officials. Early GGEs included a mix of experts on information security, some with diplomatic backgrounds and others with a more technical background. Over time, the composition of the experts changed, as countries chose to select experts with arms control, or non-proliferation experience. Experts’ technical backgrounds can be ‘left behind’ in the sometimes intense diplomatic negotiations that accompany a GGE.

Each GGE selects a Chair from among its members. A strong and skillful Chair is vital to the success of the group. The Russian Federation chaired in 2005 and 2010, Australia in 2013, Brazil in 2015, and Germany in 2016. Brazil chaired the 2019-2021 Group. While it is the experts who sit at the table (there are no ‘delegations’), some experts are accompanied by advisers. In the recent GGEs, legal advisers have been particularly common.

Most GGEs meet for four one-week sessions. The Group holds its meetings in the UN format, sitting for six hours a day (from 10 a.m. 1 p.m., and then again from 3 p.m. 6 p.m.), with simultaneous interpretation in all six official languages of the UN. The GGEs’ meetings are closed and there are no publicly available meeting summaries. The closed-door format is considered essential for the frank discussions to enable GGEs to find agreement. Thus, there are also no observers – whether representatives from other governments, non-governmental organisations, the private sector or international organisations.

After multiple discussions, GGEs decided that the issues not under the purview of the First Committee – such as espionage, Internet governance, development and digital privacy – are not the focus of the Group’s work. While terrorism and crime are important topics for understanding, previous GGEs have limited themselves to calling for greater co-operation among states. They also decided that detailed discussion of these topics and the development of recommendations for them is best done in other UN bodies. 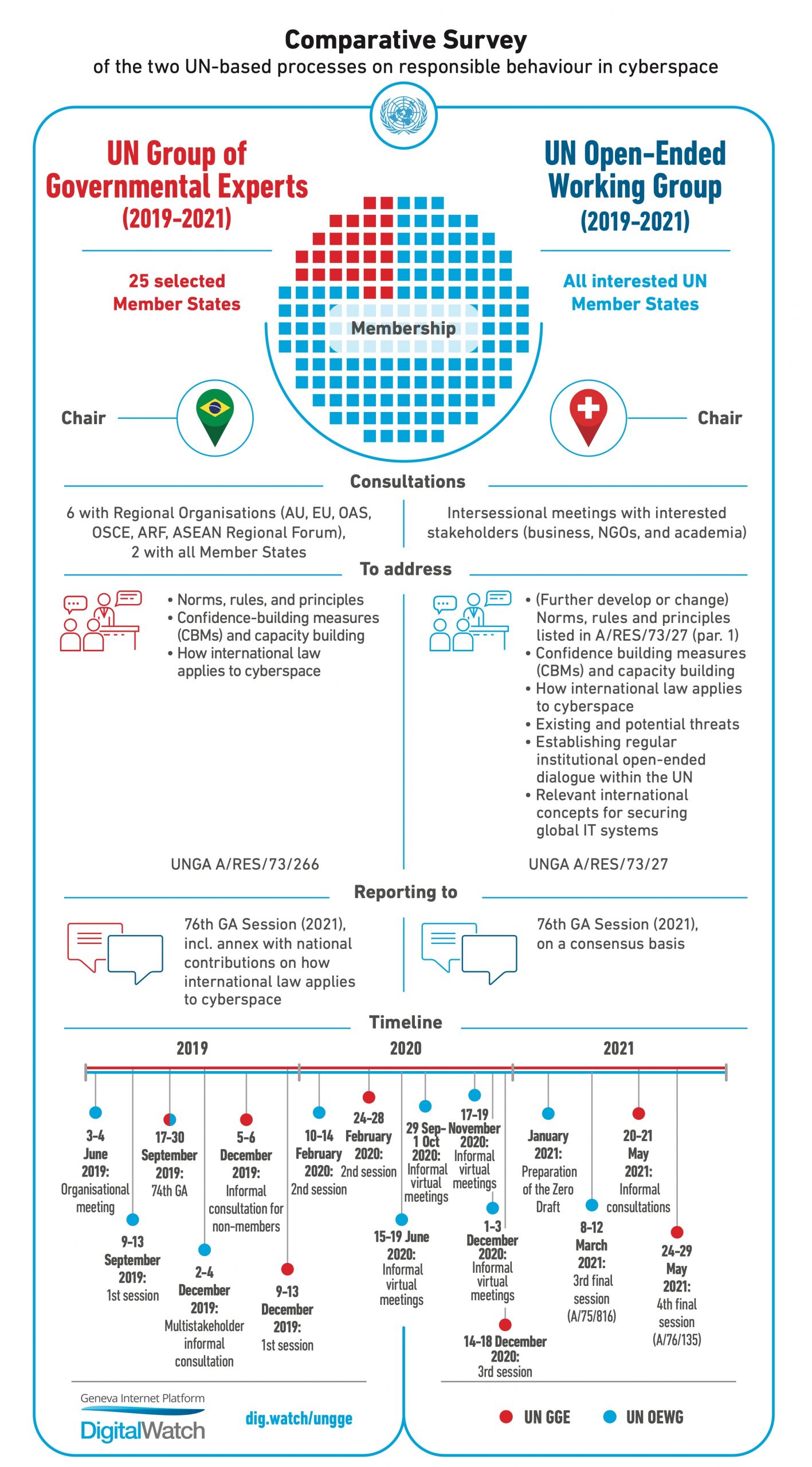