As the key policy player in modern global trade, the WTO has established a system of agreements which provides the legal architecture for the liberalization of international trade. At the WTO, discussions on e-commerce are taking place in two parallel tracks: the WTO Work Program on Electronic Commerce (WPEC), launched in 1998 with a non-negotiating and exploratory nature, and the Joint Statement Initiative (JSI) on E-commerce (recently labeled simply as ‘Joint Initiative on e-commerce’), which aims to produce a binding agreement among its members. The Joint Initiative on e-commerce encompasses both traditional trade topics (e.g. trade facilitation) and several digital policy issues, such as cross-border data flows and data localisation, online consumer protection and privacy and network neutrality.

What is a 'Joint Statement Initiative' in the context of the WTO?

Joint Initiatives are a negotiating tool initiated by a group of WTO Members who seek to advance discussions on certain specific issues without adhering to the rule of consensus decision-making involving the whole WTO membership. They are open to any WTO Member. At the present, there are several active JSIs. On the occasion of the 11th WTO Ministerial Conference, in 2017, JSIs were created on the following issues: JSI on e-commerce, JSI on investment facilitation for development; JSI on services domestic regulation; an informal working group on small and medium-sized enterprises (MSME), and an informal working group on trade and gender. In 2020, two new discussions were launched: a structured dialogue on trade and environmental sustainability and an informal dialogue on plastics pollution and environmentally sustainable plastics trade. In 2021, members of the Joint Initiative on Services Domestic Regulation concluded negotiations.

Some Members see Joint Initiatives as key mechanisms to make progress on trade liberalization, in a context in which consensus on rulemaking has been harder to achieve on a multilateral basis. Other countries argue that Joint Initiatives go against consensus-based decision-making and weaken multilateralism at the WTO. India and South Africa, in particular, introduced a communication in February 2021 (WT/GC/W/819), questioning the legality of Joint Initiatives and their outcomes.

When was the Joint Statement Initiative on e-commerce launched?

The first Joint Statement on Electronic Commerce (WT/MIN(17)/60) was released at the 11th Ministerial Conference in Buenos Aires on 13 December 2017. The 71 signatory members to the statement announced their goal to ‘initiate exploratory work together toward future WTO negotiations on trade-related aspects of electronic commerce.’

In 2018, members involved in the first JSI on e-commerce met on an almost monthly basis. Proposals for issues to be added to the agenda were tabled by both developing countries (e.g. Argentina, Brazil, Colombia, Costa Rica, and Singapore) and developed countries (e.g. Australia, Canada, the EU, Japan, New Zealand, and the USA).

During the 2019 World Economic Forum Annual Meeting in Davos, 76 members announced a Second Joint Statement (WT/L/1056) expressing the participating members’ intention to begin negotiation at the WTO on ‘trade-related aspects of electronic commerce (…) that builds on existing WTO agreements and frameworks with the participation of as many WTO Members as possible.’ The co-facilitators of the JSI on e-commerce are Australia, Japan and Singapore.

What is the relation between the Joint Initiative and the Work Program on e-commerce?

E-commerce discussions in the WTO currently take place in two parallel tracks. The first is known as ‘the multilateral track’, which was launched in 1998, following the Ministerial Declaration on Global Electronic Commerce. The second involves a subset of WTO members, which are currently part of the WTO JSI on e-commerce.

The 1998 Ministerial Declaration on e-commerce launched the Working Program on e-commerce (WPEC) and put in place a moratorium on customs duties on electronic transmissions, by stating that Members would “continue their current practice of not imposing customs duties on electronic transmissions”. The moratorium has been renewed roughly every two years at the WTO Ministerial Conference. The last renewal took place in 2022 at the 12th WTO Ministerial Conference.

The WPEC was mainly designed to build understanding around the trade-related aspects of e-commerce, without a pre-set objective to negotiate new rules. Its main goals are: a) to examine all trade-related aspects of e-commerce; b) to examine the relation between e-commerce and WTO agreements; c) to give consideration to the economic, financial, and development needs of developing countries.

While the WPEC involves all WTO Members and has an exploratory and informative nature, the JSI involves a subset of WTO members and is aimed at achieving a high standard negotiated outcome that builds on existing WTO Agreements and frameworks with the participation of as many WTO Members as possible. 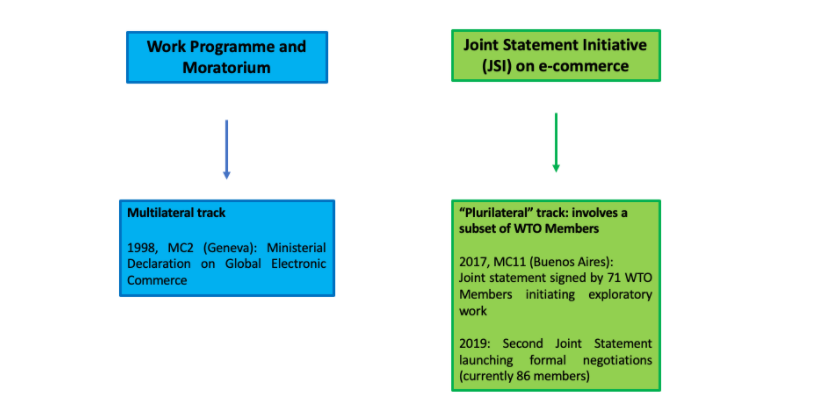 Which countries are part of the Joint Initiative on e-commerce?

Currently, the total number of WTO members formally participating in the e-commerce JSI negotiations is 87. The last country to join the JSI was Mauritius, in September 2022. JSI participants account for slightly more than half of all WTO members and 90% of global trade. With regards to the participation of developing countries, some regions remain notably underrepresented. There are seven WTO members from Africa: Benin, Mauritius, Nigeria, Côte d’Ivoire, Kenya, Cameroon, and Burkina Faso. There are four participants from LDCs, namely: Benin, Lao PDR, Myanmar, and Burkina Faso. The regions that are least represented in the JSI are Africa, and the Caribbean, which has no participants. In addition, none of the developing Pacific Island countries are part of the JSI on e-commerce.

What is being discussed in the Joint Initiative on e-commerce?

Over recent years, an increasing number of digital policy issues have been included under trade negotiations on e-commerce at the WTO, and also in the context of Regional Trade Agreements (RTAs). This reality is reflected in the negotiating agenda of the JSI on e-commerce, which includes not only traditional issues, such as trade facilitation and market access, but also a wide range of digital policy issues, such as data flows, localisation, data protection, cybersecurity and spam.

The themes advanced in members’ proposals have been aggregated in six sections in JSI’s negotiating document: A. enabling electronic commerce; B. openness and e-commerce; C. trust and e-commerce; D. cross-cutting issues; E. telecommunications; and F. market access. Click on "expand" to access a table that provides an overview of the themes and the related issues and sub/issues currently considered in the JSI negotiations.

How are discussions being carried out?

Following the COVID-19 pandemic, JSI meetings started to take place in hybrid and virtual formats. Negotiations take place both in small groups and in monthly plenary meetings. Small groups work in parallel, covering a wide range of issues, such as: consumer protection; spam; e-signatures and electronic authentication; paperless trading; digital trade facilitation; source code; open government data; market access; customs duties on electronic transmissions, and open Internet access. New small groups as created as needed. For example, in May 2022, new small groups were created on privacy and on updating the telecommunications reference paper. In September, a small group on information and communication technology (ICT) products that use cryptography was created

The adoption of a small groups approach aimed to increase efficiency (since the groups work in parallel) and reduce differences of view on the specific issues for which quick progress is more likely to be made.

In June 2022, during the 12th WTO Ministerial Conference, the Ministers of Australia, Japan and Singapore issued a statement, committing to revise the working modalities of the Joint Initiative, and seek expedited progress in the negotiations. Accordingly, in July 2022, a 'new phase in the negotiations' was announced by the co-conveners. A 'stocktaking small group' was created to examine proposals that did not attract enough support. The withdrawal of proposals from single proponents was encouraged in order to facilitate negotiations.

Most of the documents introduced by Members and produced by the chairs - including the consolidated negotiating texts - are accessible only to members of the WTO.  A proposal introduced by Canada, New Zealand and Ukraine in 2020 (INF/ECOM/42/Rev.2), aimed at enhancing transparency in the Joint Initiative on e-commerce by making negotiating summaries public, did not lead to any visible change in procedure.

What is the status of negotiations?

Regular updates on the negotiations are issued by the three co-coordinators of the JSI. According to these updates, negotiators have reached convergence in a few areas. In February 2021, the facilitator of the small group discussion on spam announced that the group had finalised a ‘clean text’ – in which brackets were removed, and convergence was reached among members. In April 2021, a clean negotiating text on the issue of electronic signatures and authentication was finalised. In September, JSI participants reached agreement on the topics of consumer protection and open government data. A clean text on ‘transparency’ has been ‘parked’ for the time being, subject to the final scope and legal structure of the negotiated outcome.

In October 2022, the co-conveners affirmed that negotiations reached a critical moment and urged participants to "find a good landing zone for the articles of existing small groups".  The third consolidated document, expected to be published by the end of 2022, will show the progress made, "where the energy in these negotiations is currently concentrated and which provisions are moving forward".

Small groups on e-invoicing, cybersecurity, privacy and telecommunications met in October, and a small group on information and communication technology (ICT) products that use cryptography was created.

The 12th WTO Ministerial Conference (MC12) took place from 12 to 17 June, in Geneva. The Conference had already been postponed twice because of COVID-19-related restrictions.

During MC-12, the co-conveners of the Joint Initiative issued a statement in which they welcomed “the good results achieved in the negotiations to date and remain committed to agreeing on a global set of digital trade rules as rapidly as possible.” They committed to issuing a revised Consolidated Negotiating Text by the end of 2022 and to revise the JSI’s working modalities to “seek expedited progress in the negotiations, including on the key issues of data flows and data localisation”.

The co-conveners also recognised barriers faced by least developed and developing countries to “utilise e-commerce for their benefit”. In response to these challenges, they launched the E-Commerce Capacity Building Framework. The Framework is expected to “bring together a wide range of technical assistance and capacity building efforts to support countries participating in the E-Commerce JSI” in order to help them harness the opportunity of digital trade. The co-conveners also expressed the support from JSI participants to the continuation of the moratorium on customs duties on electronic transmissions.

At MC12, a Ministerial Decision concerning the Work Programme on Electronic Commerce was approved. The decision renews the moratorium on customs duties on electronic transmissions until 2023, when MC13 is expected to take place. If the Ministerial is postponed, the moratorium cannot be extended beyond 31 March 2024 without a decision from the General Council. The Ministerial Declaration instructs the General Council to hold periodic reviews on the moratorium, including on its scope, definition and impact.  Member countries also agreed to reinvigorate the work under the Work Programme on Electronic Commerce, particularly in line with its development dimension.

What are the expectations for the Joint Initiative in 2022?

A revised consolidated negotiating text will be issued the end of 2022. The co-conveners expect that convergence on most issues will be reached by then. In order to achieve this goal, a stocktaking effort is being conducted to examine proposals that did not attract enough support, and the withdrawal of proposals from single proponents is being encouraged in order to streamline the negotiating text. This new consolidated document will be the base for negotiations in 2023, a year in which negotiations are expected to be concluded.