Report shows the state of e-commerce in Europe

The recently published European B2C Ecommerce Report by Ecommerce Europe revealed that the total e-commerce turnover in Europe increased by 11 percent in 2017, and is worth 534 billion euros. For 2018, a growth rate of 13 percent is expected, which would mean that e-commerce in Europe will be worth 602 billion euros. Most of e-commerce is still being generated in Western Europe, which accounts for approximately 68 percent of total European online retail turnover. The United Kingdom (€178 billion), France (€93.2 billion) and Germany (€93 billion) are the three biggest e-commerce markets in Europe. Southern Europe (12%), Northern Europe (8%) and Eastern Europe (6%) show a much lower share of European ecommerce, but these are also the regions with the fastest ecommerce growth. When it comes to marketplace ranking, Amazon and eBay are dominant in Europe, but Alibaba Group is slowly moving in from the Eastern countries. 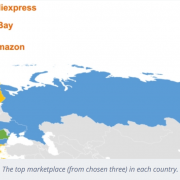