Stressing the importance of internationalised domain names (IDNs) as part of a special report Domain names on a multilingual internet, Viviane Reding, former EU commissioner for culture, information society and justice, said that ‘Endangered languages could be saved by the internet‘. In another article from the same report, Emily Taylor, author of the World Report on the Internationalised Domain Names 2018, noted her concern that IDNs are not achieving everything they could to increase the use of non-Latin domain names in Europe, pointing out a downward trend in the number of websites using IDNs. Taylor highlighted the need to increase the use of IDNs, saying ‘Urgent action is needed unless we all want to continue speaking English.’ This series of articles is part of the follow-up after the European Internet Forum meeting, Language access to the internet, held earlier this year, highlighting the importance of linguistic diversity and the need to foster universal acceptance and increased use of IDNs. 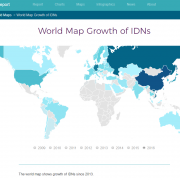