Google announced plans to launch its latest private subsea cable project dubbed Dunant. The cable will cross the Atlantic Ocean from Virginia Beach in the U.S. to the French Atlantic coast. According to Google’s blog post, ‘Dunant adds network capacity across the Atlantic, supplementing one of the busiest routes on the internet, and supporting the growth of Google Cloud’. 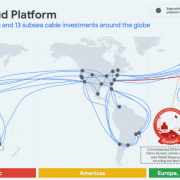