Freedom on the Net 2018 shows decline in Internet freedom

Freedom House’s report Freedom on the Net 2018: The Rise Of Digital Authoritarianism shows key findings that:

In his introduction to the report, Fake news, data collection, and the challenge to democracy, Adrian Shahbaz said ‘Events this year have confirmed that the internet can be used to disrupt democracies as surely as it can destabilize dictatorships’  […] ‘With or without malign intent, the internet and social media in particular can push citizens into polarized echo chambers and pull at the social fabric of a country, fueling hostility between different communities.’ 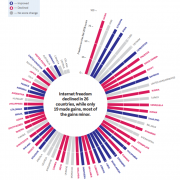