Top-level domains (TLDs) are at the top of the Domain Name System (DNS), which is managed by the Internet Corporation for Assigned Names and Numbers (ICANN). Domain names allow us to find a given location on the Internet. There are two types of TLDs: generic TLDs (gTLDs), such as .com, .net and .org, and country code TLDs (ccTLDs), designating countries and territories, such as .br for Brazil and .ua for Ukraine. For many years, the number of gTLDs was limited to 22.

In 2012, ICANN launched the New gTLD Program, opening up the DNS beyond this number. Under the new programme, any organisation could apply for a new gTLD, as long as it complied with a series of criteria established by ICANN.

Since then, the DNS has expanded to more than 1200 gTLDs. Currently, the programme is under continuous review and there is ongoing work on preparing new gTLD rounds. 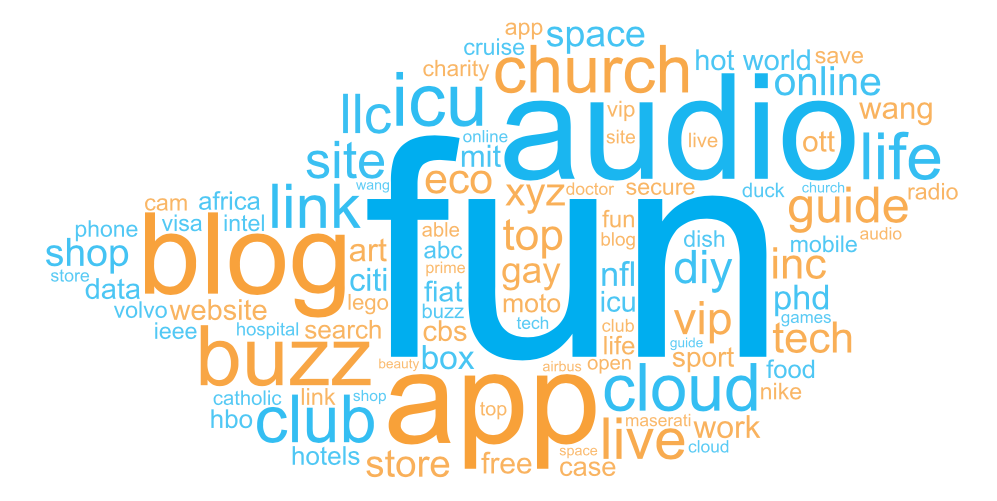 In June 2019, ICANN published an informational paper on the organisation’s readiness to support future rounds of new gTLDs. The document outlines a series of working assumptions used by ICANN in preparing for a subsequent round of new gTLDs.

The first expansions of the DNS

ICANN's work on the introduction of new TLDs has been underway since 1999. By mid-1999, Working Group C – entrusted with considering the introduction of new gTLDs – reached a consensus that ICANN should add new gTLDs to the root by means of an initial rollout of six to ten new gTLDs, followed by an evaluation period. As part of this process, seven new domains were introduced in 2001 and 2002: .aero, .biz, .coop, .info, .museum, .name, and .pro. Among them, .aero, .coop, and .museum are sponsored gTLDs – they have a ‘sponsor organisation’ to which is delegated some defined policy-formulation authority regarding the operation of a particular sponsored TLD. This was the first effort to expand the domain name system since the 1980s, except for adding ccTLDs.

In July 2002, the New TLD Evaluation Process Planning Task Force defined the criteria for the assessment of this initial round under four categories: technical, business, legal, and process. The outcome of the evaluation focused on policy and legal aspects. The evaluation of other dimensions was still ongoing when a round of TLDs took place in 2003 and 2004, that led to the introduction of six new sponsored TLDs: .asia, .cat, .jobs, .mobi, .tel, and .travel.

Following the success of these ‘proof of concept’ rounds, ICANN’s Generic Names Supporting Organization (GNSO) – the body responsible for the development of policies concerning gTLDs – took steps to develop a mechanism for applicants to propose new gTLDs. The GNSO requested an issues report, which was published on 5 December 2005 and covered four areas: whether to continue to introduce new gTLDs; the criteria for approving applications; the allocation method for choosing new gTLDs; and the contractual conditions for new gTLDs.

The issues report provided the framework for the GNSO policy development process (PDP). The Governmental Advisory Committee (GAC) also helped to frame the discussion, with its March 2007 Public Policy Principles for New gTLDs.

The reasons pointed out by the GNSO to justify the creation of new gTLDs were based on the successful experience of the proof-of-concept round, which showed that there are no technical impediments for their introduction. It was also based on the belief that expanding the domain name space to accommodate the introduction of new gTLDs, including internationalised domain name (IDN) top-level domains, would give end-users more choice about the nature of their presence on the Internet and offer them multilingual options.

Based on the GNSO recommendations, the ICANN Board directed staff to develop an implementation plan. As a result in June 2011, the ICANN Board approved an Application Guidebook (AGB) for new gTLDs and authorised the launch of the New gTLD Program. The AGB provided that it was intended to govern ‘the first round of what is to be an ongoing process for the introduction of new gTLDs’ and that ‘ICANN's goal [was] to launch subsequent gTLD application rounds as quickly as possible’.

In January 2012, the New gTLD Program was officially launched, and applications started being received. At the end of the application period, ICANN received 1930 applications for new gTLDs.

Since the start of the discussions on the introduction of new gTLDs, governments represented in the GAC have raised numerous concerns related to the public policy implications of new gTLDs. These have been the subject of many pieces of advice submitted by the GAC to the ICANN Board, both before and after the launch of the New gTLD Program.

Below is an overview of the main GAC concerns and requirements, clustered into broader policy areas.

A more comprehensive record of GAC advice on new gTLDs is available on the GAC website.

After the application period for new gTLDs closed, the GNSO created the New gTLD Subsequent Procedures Discussion Group, in 2012, with the aim to follow-up and review the first round of the New gTLD Program. The deliverables of the Discussion Group were published in June 2015 and they included a matrix of topics that should be revisited. The GNSO Council requested the production of an Issue Report, which was published in December 2015, providing the framework for the initiation of a PDP that may lead to changes or adjustments for subsequent new gTLD rounds.

In December 2015, the GNSO approved the creation of the Working Group on New gTLD Subsequent Procedures (SubPro WG), to review and improve, if necessary, the 2007 GNSO’s policy recommendations. The WG is tasked with: (a) clarifying, amending or overriding existing policy principles, recommendations, and implementation guidance; (b) developing new policy recommendations; (c) supplementing or developing new implementation guidance. Any changes to the current policy would affect procedures for introducing additional gTLDs in the future.

The SubPro WG started by analysing the principles and policy recommendations from the 2007 GNSO policy. The aim was to assess if these recommendations still hold and to identify the ones that require further discussion.

The WG clustered its substantive discussions in two areas: a discussion on overarching issues and a discussion based on working tracks. The following overarching questions were shared with all ICANN supporting organisations and advisory committees at the beginning of the WG’s work.

A discussion on whether or not additional gTLDs should be introduced has taken place. A list of pros and cons of the creation of new gTLDs has been proposed.

Predictability is critical for planning and decision-making. However, adjustments were introduced throughout the new gTLD round, including in important documents, such as the AGB and the base registry agreement. Some standards on predictability have been identified.

This issue is deeply linked with the need for predictability. Without robust community engagement, it is conceivable that New gTLD Program requirements could be altered after the launch of the programme.

This issue stems from one GNSO recommendation says that applications must initially be assessed in rounds until the scale of demand is clear. Nevertheless, other methods have been envisioned, such as a perpetually open programme, accepting applications on a rolling basis. A list of pros and cons has been created.

In the AGB, only two types of TLDs had been identified: a community-based application and a standard application. Some examples of categories that were proposed for consideration include closed generics, further refinements around .brand TLDs, sensitive strings, and strings related to regulated markets. The last two stem largely from the GAC’s Beijing Communiqué on Safeguards on New gTLDs.

There were no policy recommendations in the 2007 GNSO final report that sought to place restrictions on the number of applications that could be submitted from a single applicant. This issue has been discussed by the working group, and a list of pros and cons of establishing restrictions has been elaborated.

Within the WG, several work tracks were established to carry on work on specific sub-sets of issues:

The sub-group has been looking into questions such as: How can the Applicant Guidebook be improved to ensure that it meets the needs of multiple audiences? How can the application process avoid developing processes on an as-needed basis? How can the systems used to support the New gTLD Program be made more robust, user-friendly, and better integrated? Should the new gTLD application fee be variable based on such factors as application type, multiple identical applications, etc?

The sub-group has been considering issues such as: reviewing the composition of the reserved name list to determine if additions, modification, or subtractions are needed; considering whether the registry/registrar relationship should have additional standardisation and regulation; determining whether there should be restrictions around exclusive use of generic TLDs.

Issues explored within this track include: evaluating whether rules around IDNs properly accounted for recommendations from IDN WG; determining and addressing policy guidance needed for the implementation of IDN variant TLDs; examining whether financial and technical criteria were designed properly to allow applicants to demonstrate their capabilities while allowing evaluators to validate their capabilities.

This sub-group focused on developing proposed recommendations regarding the treatment of geographic names at the top-level. Its final report addressed to the full WG was published in October 2019.

The SubPro WG published its initial report in July 2018. The report, which was under public consultation until late September 2018, includes a series of preliminary recommendations, options, and questions for community input.

Some of the recommendations and options outlined in the initial report

A report summarising the public comments on the WG’s initial report was published by ICANN in November 2018. In the same month, the WG published a supplemental initial report covering topics not addressed in the July 2018 report. This too was open for public comment (until late December 2018). The sub-group on Work track 5: Geographic names at the top-level published its final report addressed to the full WG in October 2019.

Current work and next steps

As at April 2020, the WG is developing and reviewing draft final recommendations on a topic-by-topic basis, taking into consideration the group's review of its summary documents and any additional deliberations that have taken place.

In line with its work plan, the WG intends to finalise its report and publish it for public comments in July 2020. A final report is expected to be submitted to the GNSO no later than 31 December 2020. Meanwhile, the group publishes period updates on the status of its work via its newsletters.

Parallel activities that could impact the work on new gTLDs

There are several ongoing working groups, policy development processes, and other community efforts within ICANN that could influence the discussions on new gTLDs rounds.

The GAC has formed working groups on several topics that are of relevance for ICANN’s work on subsequent new gTLD rounds:

Work conducted by the Security and Stability Advisory Committee (SSAC) that could have an influence on the ongoing discussions on new gTLD rounds cover issues such as root scaling, DNS abuse, and name collision.

For example, in a letter sent to ICANN’s Global Domains Division in August 2019, SSAC reiterated its concern that ‘the last round of new gTLDs appears to have introduced the phenomenon of TLDs with exceptionally high rates of abusive registrations’ and that ‘a further round of new gTLDs could be delegated prior to comprehensive metrics and mitigations being put in place to prevent such a recurrence’.

To help you navigate this page, we have put together a list of acronyms used throughout the content. 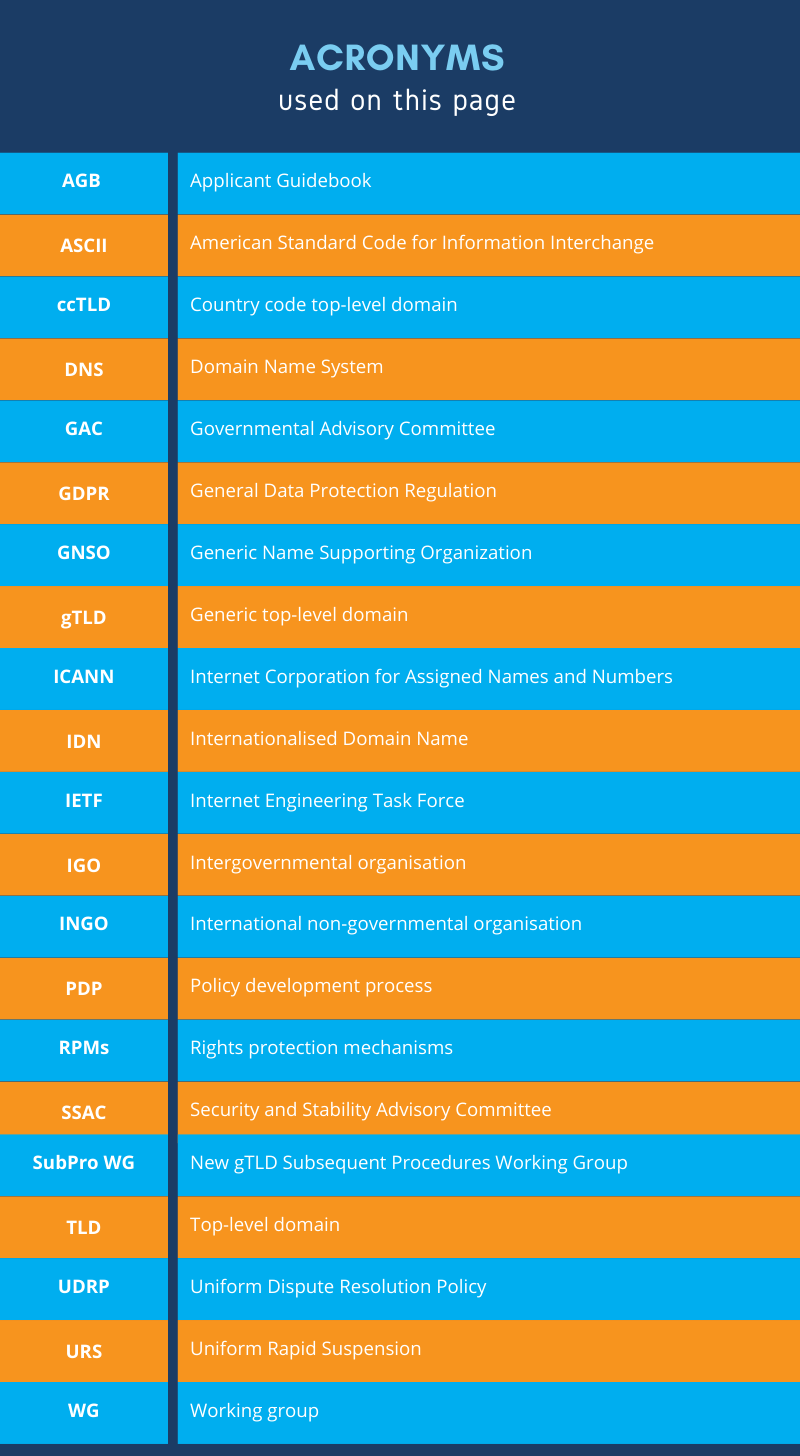