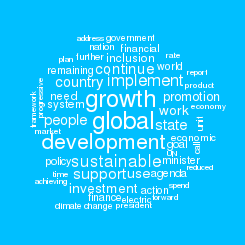 It is the right time to react and start implementing actual strategies on how to empower women in the digital age. This was one of the main conclusions of the event organised by the governments of Costa Rica, Tunisia, Sweden, Switzerland, and the USA, together with the  ITU, UN Women, Microsoft, Mozilla, and the Association for Progressive Communications. The event reflected the progress made since the adoption of instruments such as the Beijing Platform of Action and the WSIS 2003 and 2005 outcome documents.

Although the debate covered a wide range of discussion topics, a few points were repeated and emphasised several times throughout the session:

The event was moderated by Doreen Bogdan, ITU, who gave a short introduction and mentioned several figures that showed how women are still underrepresented in the field of IT. The introduction was followed by Minister Noomane Fehri, Republic of Tunisia. Fehri pointed out that there are several gaps caused by technological acceleration and that these have to be bridged. He then mentioned that the objective of ensuring gender equality in all fields is enshrined in Tunisia’s Constitution.

Part of this event was dedicated to the annual Gender Equality and Mainstreaming in Technology (GEM-TECH) Awards hosted by United Nations agency UN Women and the ITU. Malcolm Johnson, ITU, re-announced the 2015 winners who were awarded on 14 December 2015.

The longest part of the event was dedicated to panel discussions during which discussants shared their experiences and views on gender issues in the arena of technology. Minister Anusha Rehman Khan, Pakistan, stressed the important role  policymakers play in the real life implementation of gender policies and strategies. Khan noted that mutual cooperation and learning should not be omitted from such strategies.  Maja Fjaestad, Swedish Prime Minister’s Office, mentioned that, despite Sweden’s top rankings in gender issues, the country faces similar  problems to other parts of the world, and that patriarchal oppression is present even in her country. Catherine Novelli, US Department of State, shared experiences from the recently launched Global Connect Initiative, which seeks to bring people who lack Internet access online by 2020. Novelli reflected findings which acknowledge the economic benefits associated with women being active in the ICT sector. Mitchell Baker, Mozzila, mentioned the Web literacy programme, developed in cooperation with UN Women, and which focuses on the attitudes of individuals. Anriette Esterhuysen, APC, said that we should admit that online misogyny exists, but that society should empower women rather than seek to protect them. The answer is in awareness building, encryption, gender neutral speech, and use of other tools and techniques.

In the closing part of the event, Lakshmi Puri, UN Women, introduced an Action Plan to Close Gender Digital Gap. It was noted that the Action Plan should build on past processes and other commitments and outcomes of WSIS, the Beijing Declaration and Platform for Action, and General Conclusions of the Commission on the Status of Women. The plan outlines the following main action areas: