In the past years, the industry has been proposing new cyber norms to protect cyberspace. The industry is increasingly stepping into a norm-developing role, which was previously mainly the ambit of governments. In this space, you can follow the developments on main proposals: Microsoft’s proposed Digital Geneva Convention, Cybersecurity Tech Accord, Charter of Trust for a Secure Digital World, and Google’s proposed legal framework for digital security and due process.

Microsoft’s call for a Digital Geneva Convention (February 2017) – which should ‘commit governments to avoiding cyber-attacks that target the private sector or critical infrastructure or the use of hacking to steal intellectual property’ – attracted the attention of the digital policy community. It brought into focus the idea that, in the search for a more secure and stable Internet, Internet companies need to engage with governments and work together on reasonable policy arrangements. The proposal gave rise to many pertinent questions related to the future of digital governance, in particular in the security field. Here, we address some of them.

In April 2017, Microsoft’s Brad Smith announced three new documents that continue to shape the proposal for a Digital Geneva Convention. The first carries key clauses which should form part of the convention; the second outlines a common set of principles and behaviours for the tech sector to help protect civilians in cyberspace; the third proposes the setting up of an independent attribution organisation to identify wrongdoing. In May 2017, Smith renewed the call for a Digital Geneva Convention, in response to the WannaCry ransomware attack.

What is the main aim of a Geneva Digital Convention?

The Geneva Digital Convention, proposed by Brad Smith, Microsoft’s President and Chief Legal Officer, aims at creating binding rules out of the voluntary norms on secure cyberspace developed by the UN GGE and regional organisations. Embedded within a convention, these and few other additional norms could become a legal obligation, with the corresponding enforcement mechanisms. According to Microsoft’s proposal, the convention should motivate states to adhere to the agreed norms.

What should a Geneva Digital Convention regulate?

The six principles proposed by Microsoft are typically based in national security, related to both defensive and offensive cyber-operations. They are a mix of policy and legal regimes. Principle 1 could be classified as the ius ad bellum principle, dealing with justification and prevention of conflicts; principles 3, 4, and 5 have a strong cyber-disarmament focus; principles 2 and 6 are applicable both in conflict and peacetime operations.

Moving from the six principles, Microsoft’s arguments shift towards protecting citizens in the case of conflict – which in legal terms is known as ius in bello – or even broadly speaking towards what we might call human cybersecurity. Human security is anchored in the protection of human wellbeing. Since human wellbeing increasingly depends on digital space, the question of human cybersecurity is likely to come more into focus. 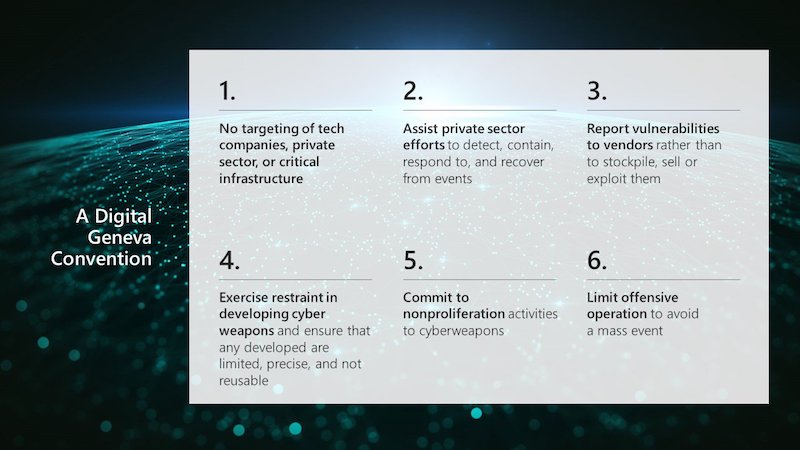 In April 2018, 34 tech companies - including Microsoft, Facebook, LinkedIn, Arm, ABB, Telefonica, Cisco, and Dell among others - have agreed on the Cybersecurity Tech Accord, publicly committing to protect and empower all customers everywhere from malicious attacks by cybercriminal enterprises and nation-states, and to improve the security, stability and resilience of cyberspace.

The four principles to which the companies committed, could be summarised as:

Signatories of the Accord will define collaborative activities they will undertake to further the Accord and will report publicly on the progress in achieving the goals.

Charter of Trust for a Secure Digital World

In February 2018, several lead global technology companies - Siemens, IBM, Deutsche Telecom, Airbus and others - have presented their joint Charter of Trust for a Secure Digital World calling for shared ownership of cyber and IT security by various stakeholders, responsibility throughout the supply chain, security by default, education, certification for critical infrastructure and solution, transparency and response, regulatory framework, and joint initiatives.

The 10 principles of the Charter could be summarised as:

Paris Call for Trust and Security in Cyberspace

At the opening of the annual UN Internet Governance Forum (IGF), held in 2018 at UNESCO premises in Paris, French President Emmanuel Macron launched the “Paris Call for Trust and Security in Cyberspace”, a high-level declaration on developing common principles for securing cyberspace. The Paris Call builds on the WSIS Tunis Agenda’s definition of the ‘respective roles’ of states and other stakeholders. It also resonates with the UN Group of Governmental Experts reaffirmation that international law applies to cyberspace. The declaration invites for support to victims both during peacetime and armed conflict, reaffirms Budapest Convention as the key tool for combating cybercrime, recognises the responsibility of private sector for products security, and calls for broad digital cooperation and capacity-building. It than invites signatories to, among other, prevent damaging general availability or integrity of the public core of the Internet, foreign intervention in electoral processes, ICT-enabled theft of intellectual property for competitive advantage, and non-state actors from ‘hacking-back’.

Paris Call was signed by over dozens of countries and hundreds of businesses and organisations worldwide. The USA, Russia, and China, as well as some of the lead tech companies, are missing.

Google's proposal legal framework for digital security and due process

The Internet industry is under increasing pressure by governments to provide digital information to be used in criminal investigations and anti-terrorist activities. Traditional channels for international cooperation are slow and cumbersome. A regular legal process for obtaining digital evidence via Mutual Legal Assistance Treaties (MLATs) may take at least ten months. To bring the legal system up to speed for the digital era, Google has proposed new norms for providing digital evidence to foreign governments.

Google’s proposal would allow law enforcement to request digital evidence directly from Internet companies, bypassing the need to go through MLAT channels. According to the proposal, this would work only between countries that adhere to privacy, human rights, and due process standards.