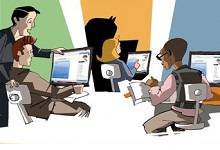 To assist diplomats in grasping the complexity of this multidisciplinary and  multistakeholder political environment, and to bring them up to speed on what to follow, when to follow it, and how to follow it, the Geneva Internet Platform (GIP), operated by DiploFoundation, offers a monthly Geneva Briefing on Internet Governance, besides other activities. The briefing webinars take place online on the first Tuesday of every month at 13:00 hrs (CET). Each briefing discusses the main developments in the previous month and looks at those envisaged along with global events scheduled for the coming month. The next briefing will take place on 7 October.

After the unusually (politically) warm IG summer, which we covered within the special blog post last month, in our September briefing we focused on the just-ended 9th Internet Governance Forum that took place 2‒5 September in Istanbul, Turkey. The main impression is that, after some years of plummeting in relevance, the IGF is again managing to position itself at forefront of global politics.

The IGF has managed to re-establish itself thanks to several improvements in line with the Recommendations of the CSTD Working Group in the IG Improvements ‒ namely establishing the capacity building track and the regional IGF track, improving outreach and even leading the way towards the improved financing, and introducing a first set of more tangible outputs in the form of a Best Practice Forum. More importantly, the IGF has managed to keep abreast with the hot IG challenges and openly discussed issues such as surveillance in 2013, and net neutrality, the NETmundial outcomes and perspectives, the and IANA transition in 2014.

According to official statistics of the IGF Secretariat, the IGF in Istanbul was attended by over 2400 onsite participants and almost 1200 remote participants – most of which came from t civil society and also from the various governments; this was seen as an improvement in the IGF’s outreach. A part of civil society, however – especially activists from Turkey – decided not to attend the IGF in protest of the oppressing behaviour of the government over the Internet and new media in Turkey; instead, they gathered at the Internet Ungovernance Forum.

Diplo's text-mining analysis of the IGF opening session shows that the dominant rhetorical tone was optimism, followed by certainty, while activity was moderate, and realism and commonality were way below. The analysis of the transcripts of all the IGF sessions distinguishes the wordpeople being the second most frequently relevant word (right after Internet), while right andaccess appear within the first 20 most frequently used words, showcasing the dominant thematic areas. Government, process, and participation stay close to each other at the end of the top 30 most frequently used words. Detailed results of the text-mining analysis of the IGF transcripts are available on our blog (here and here).

One of the highlights of the 9th IGF was the wide support (and some requests) for the extension of the IGF mandate for another 10 years (an opinion also expressed by MAG members during their meeting with the Assistant Secretary General of the UN Mr Thomas Gass). The founding of the IGF Support Association, initiated by ISOC and opened to individuals and institutions on a membership fee basis, should provide a platform for easier fundraising and financial contributions to support the work of the IGF Secretariat and possibly other components of the IGF such as remote participation, capacity building, and fellowships for participants from developing countries. A full-day pre-IGF event devoted to NETmundial (the evaluation of the process and outcome document, as well as discussions about the future of NETmundial Initiative) and a main session on the future of IG (the ICANN and IANA processes, WSIS+10 developments, NETmundial prospects, etc.) were other highlights, proving that the IGF has (again) become a hub for discussion about IG and all the related political processes and hot topics.

Further improvements to the IGF were also visible. Discussion of controversial topics openly and extensively has continued, this time in the form of a main session on net neutrality. The Best Practice Forum was an innovation towards more tangible outcomes of the IGF; discussions about child protection, CERT, local content, multistakeholder mechanisms, and spam will be summarised in a document after the last round of comments on the current draft are collected. Following the experience from the NETmundial, community input (policy questions and concerns) on topics at the IGF sessions were allowed till a month before the IGF, and were incorporated into the agendas of the related sessions. The National and Regional IGFs Track has again taken place, while the Capacity Building Track was strengthened with the new format of the Orientation session and a set of pre-IGF Orientation webinars in Africa, LAC, and Asia-Pacific.

Net neutrality was one of the most controversial topics of this year’s IGF. The main session analysed technical, economic, and human rights perspectives – with a special focus on developing countries – and brought together a number of involved experts, including one of the Commissioners of the US FCC, and a room full of other professionals interested in the topic. Emerging challenges such as zero-rating, specialised services, and platform neutrality were discussed, as well as how to define and protect public interests while encouraging investment and maintaining innovation. It was apparent from the panel discussion that the IGF should follow up on this discussion, especially through the work of its Dynamic Coalition but also possibly through other forms of inter-sessional working groups and discussions.

Human rights were also high on the agenda, resulting in a roundtable which endorsed a message document which was later brought to the UN Human Rights Council panel on Privacy in the Digital Age on 12 September 2014. There were initiatives to create another track of the Best Practices Forum related to data-protection, and the African Declaration on Internet Rights and Freedoms was launched. Other topics in focus at the 9th IGF included Internet access in the aftermath of the MDGs, enhancing digital trust including improving the dialogue between governments and other stakeholders (interestingly, cybersecurity was not in focus as might have been expected), and strengthening the participation of youth which was rather an underdeveloped session without deserved attention and impact.

This autumn and the year to come will be highly relevant for the future of the IGF. The call for the renewal of MAG has been published on the IGF website, with a deadline for nominations set for 20 October. Approximately one-third of MAG’s membership will be renewed, and the aim is to have a constitutional meeting in early December, with the fully functional new MAG ready for the main planning meeting in February 2015. In the autumn, the UN General Assembly will discuss the possible extension of the IGF mandate for another round, likely five or ten years; it will also further discuss the way ahead with a WSIS+10 review process. At the end of October, the Plenipotentiary meeting of the ITU will take place in Busan, South Korea, to decide on the new heads and targets of the organisation. UNCTAD is currently facilitating the CSTD’s 10-year review of progress made in the implementation of the WSIS outcomes, as mandated by the Economic and Social Council (ECOSOC).

We will reflect on these developments in more detail during our next Geneva Briefing on Internet Governance which will take place on 7 October at 13:00 hrs (CET). For more information and to apply, please follow this link.

The video recording of the September webinar is available here.
The presentation is available in PDF format here.

Also see the results of Diplo's text-mining analysis of IGF 2014.

Looking forward to having you with us at upcoming webinars and other events.

The 9th Internet Governance Forum took place this week in Istanbul. With over 3,000 participants registered for the event, over 100 sessions, and a new Best Practice track, this year’s IGF promised more tangible outcomes. Join us for a special post-IGF webinar to discuss the main outcomes of #IGF2014.

The post-IGF webinar, which will be led by Diplo’s Vladimir Radunovic, will look at the main developments that took place during the week.

Note: The webinar is a follow-up of the September Geneva Briefing on Internet Governance which took place on Tuesday, 2 September 2014 from the IGF in Istanbul. If you had already registered for the first webinar, there is no need to register again.