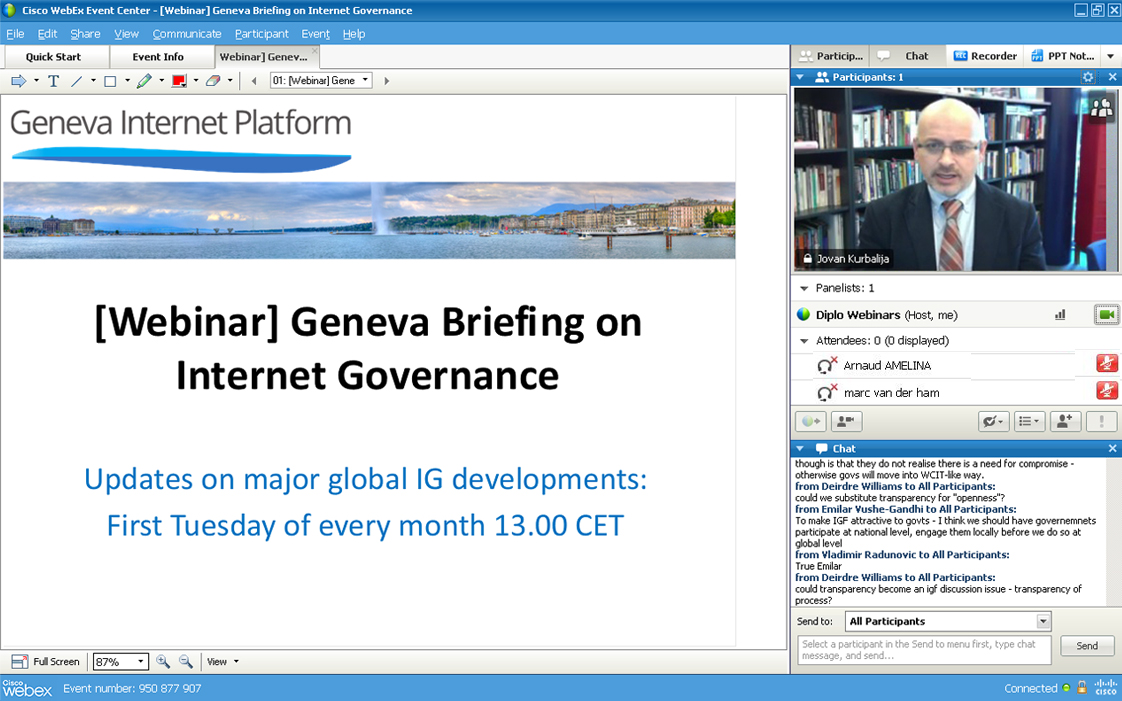 Our previous webinar provided an overview of March’s developments and an insight into expectations for April. The recording of the May webinar is available here, and a summary here.

At the April Geneva webinar-briefing on Internet Governance we focused on the final preparations for the #NETmundial and reflected on other key developments of the month; we then looked into the main events scheduled for May.

NETmundial was very much in focus in April. We have reported on the meeting in detail at the event summary, through a blog and a webinar (recording available). What is relevant to stress in this summary is the new pilot process of ‘multistakeholder negotiations of a document’ that emerged from the NETmundial and may serve as a basis for exploring similar approaches for producing tangible outcomes from other IG forums, such as the IGF. The main controversies of the outcomes document relate to the mild reference to surveillance (considered as a win for the US government and its ‘allies’), limited liability for intermediaries, insertion of a reference to copyright protection, the exclusion of net neutrality from the principles list (considered as a win for the corporate sector), and the insertion of a clause that governments are responsible for protection of human rights (considered as a win for civil society groups and countries supporting the Council of Europe’s activities). After intensive multistakeholder negotiations and several re-drafts of the outcomes document conducted by the expert team appointed by NETmundial’s organisers, the final document was adopted by ‘rough consensus’, yet several governments (including Russia and Cuba) and civil society groups have made public their strong reservations. The power of the document – and the principles and roadmap within – will be visible in the future mainly through the number of references to it in further IG processes.

The IANA transition process moved along through the NTIA’s call for public input. The NTIA provided more information on the transition process, including core principles (e.g. consensus-based, multistakeholder-formed, and evidence-based decisions) and mechanisms (e.g. forming working groups and recognising discussions in other forums such as NETmundial and the IGF). The direct participation in this transition process is envisaged mainly through the Regional Internet Registries (RIRs), I* meetings (ICANN, ISOC, the IETF, and others), and online input. The final proposal for the transition to the NTIA will be submitted by the steering group and reviewed by ICANN and affected parties for their endorsements; no voting will take place.

The ITU held its World Telecommunication Development Conference 2014 in Dubai. Broadband for sustainable development was the focus of the event, while a number of other topics were touched on directly, such as universal and affordable access, access to and accessibility, standardisation, confidence and security, capacity building, and inclusion. The ITU also had its fourth Open Consultation meeting in Geneva for the WSIS+10 High Level Event, contributing to the final documents for this June event in Geneva.

This year, the Freedom Online Conference took place in Tallinn, Estonia. There was a lot of reflection on NETmundial, especially with regard to the principles which were, according to some, not adequately addressed by the outcomes document: net neutrality and surveillance. As expected, data protection, freedoms online, freedom of expression, and the notion of 'freedom' itself were addressed across the sessions. The Council of Europe launched its guide on human rights for Internet users, while its panel sought input for the practical implementation of the guide at national level. During the event, the Open Government Partnership was seen as a potential enabler of freedom online, access to public information, and citizen engagement.

An (un)expected development in April was the decision by the European Parliament to adopt the Regulation on the Single Telecoms Market, with strong net neutrality provisions. The proponents of net neutrality saw this decision as a victory for the open Internet: the decision provided a good framework for ‘specialised services’ – a much discussed emerging aspect of the debate – that ensures non-discrimination between providers’ ‘specialised services’ while protecting the bandwidth of the ‘Internet as we know it’. The Council of the European Union is now on the move, and is expected to rule on the proposed regulation by the end of this year or in early 2015, once the new EU institutions are formed following the results of the elections in May 2014.

The Geneva Internet Platform was particularly active in April. The official launch of the GIP took place in Geneva and brought over 130 diplomats and professionals together to discuss IG issues. Besides the ongoing just-in-time online course on IG, the GIP also presented (here and here) some of the results of its data-mining analysis of NETmundial contributions and the potential of this approach. Finally, the GIP was active in reporting from NETmundial with regular blog posts (here and here) as well as through social media.

The next Geneva Briefing on Internet Governance webinar will take place on Tuesday, 3rd June, 2014. For more information and to apply, please follow the link.

The recording of the May webinar is available here.

GIP updated coverage of the meeting.

We also looked ahead to May:

The webinar was be hosted by Vladimir Radunovic with guests.

The Geneva Briefing on Internet Governance takes place on the first Tuesday of every month. If you would like to get a regular 'zoomed-out' update of the major global IG and digital policies developments, join us online for the webinar briefing from the Geneva Internet Platform(GIP) project at 13.00 CET.

Join us once a month for a round-up of the main IG-related events and developments. Every month, we look back at what happened and look ahead to what’s to come.

THE RECORDING OF THE WEBINAR IS NOW AVAILABLE HERE.