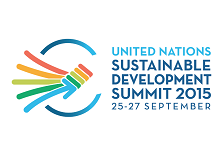 The United Nations summit for the adoption of the post-2015 development agenda will be held on 25-27 September 2015, in New York and convened as a high-level plenary meeting of the General Assembly.

The proposed six themes for interactive dialogues are:

The United Nations is in the process of defining a post-2015 development agenda. This agenda will be launched at the 2015 Summit, which is the target date for realising the MDGs. It is currently being elaborated through informal consultations of the UN General Assembly. The process of arriving at the post 2015 development agenda is Member State-led with broad participation from Major Groups and other civil society stakeholders.

There has been numerous inputs to the agenda, notably a set of Sustainable Development Goals (SDGs) proposed by an open working group of the General Assembly, the report of an intergovernmental committee of experts on sustainable development financing, GA dialogues on technology facilitation and many others.

The United Nations has played a facilitating role in the global conversation on the post 2015 development agenda and supported broad consultations. It also has the responsibility of supporting Member States by providing evidence-based inputs, analytical thinking and field experience.

More details, including information on the post-2015 process, and background documents are available on the event webpage.