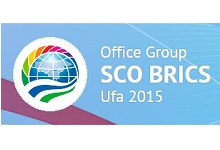 The next Shanghai Cooperation Organization (SCO) summit will be held on 9-10 July 2015 in Ufa, Russia, along with the summit of the BRICS (an acronym standing for Brazil, Russia, India, China and South Africa). Five BRICS summits have been held so far: in 2009 in Yekaterinburg, Russia; in 2010 in Brasilia; in 2011 in Sanya, China; in 2012 in New Delhi, India; in 2013 in Durban, South Africa. BRICS Leaders have also met on the sidelines of other multilateral meetings. SCO is an intergovernmental international organization founded in Shanghai on June 15, 2001 by six countries – China, Russia, Kazakhstan, Kyrgystan, Tajikistan and Uzbekistan. The bloc is led by China and Russia, and includes Kazakhstan, Tajikistan, Kyrgyzstan, and Uzbekistan. Observer states are Afghanistan, India, Iran, Mongolia, and Pakistan. Belarus, Turkey and Sri Lanka have a status of partners in dialogue. The SCO's member states cover an area of over 30 million sq. km, or about three fifths of Eurasia, with a population of 1.455 billion, about a quarter of the world's total. Its working languages are Chinese and Russian. Press releases about the summits are available here and here. For updates, visit the summits' website. |full_html