Round Table on Open Innovation in the Proprietary World 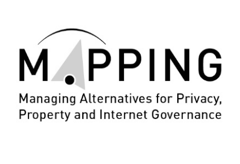 Intellectual property (IP) is often protected by a time-limited monopoly on economic exploitation of exclusive rights. It is often alleged that business models based on such a traditional IP conceptualization can stifle scientific and technological progress, often leading to prohibitive practices and chilling effects on the economy and on innovation. Open Source (OS) software and Creative Commons (CC) licences have emerged as amongst the most acclaimed alternatives to hurdles created by the traditional business models. Although most open innovation endeavours offer both tangible and intangible benefits to participants, not all eschew the more traditional economic rewards. Many new companies have been built on such concepts.

Join representatives of the MAPPING consortium and other main stakeholders from around the world in a reflection on the impact of the current EU IPR protection regime on innovation and economic growth and the future of Open Innovation in the proprietary world.

We will tackle questions such as:

[Update] An updated conference agenda, including speakers' bios, is available.

The round-table agenda is as follows: