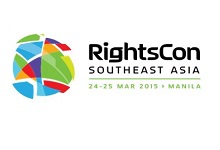 The 2015 RightsCon summit is being held in Manila, Philippines, on 24-25 March 2015. The summit is organised by Access, an international NGO that defends and extends the digital rights of users at risk around the world. By combining innovative policy, user engagement, and direct technical support, Access fights for open and secure communications for all.

The RightsCon summit series is fast becoming the premiere event convened around the issue of an open internet. The goal is to produce measurable outcomes by convening the most influential voices across stakeholder lines on topical and current issues on the protection and future of the internet.

Access held the first RightsCon in Silicon Valley in 2011 and the second, regionally-focused conference in Rio in 2012. The first two events were sold out with more than 400 opinion leaders from across the sector and the world in attendance.

The 2014 conference, held 3-5 March 2014, headed back to Silicon Valley and leveraged the experience of the two conferences that came before it. Setting a precedent for future events, 2014 marked the first year Access opened up conference programming to the experts: our participants. Working with an all-star programming committee, Access accepted and reviewed proposals for innovative, thought-provoking, and outcome-oriented sessions. The product was a stellar program which featured 120 distinct sessions over a period of three days.

For regional events, Access partners with local institutions with a deep knowledge of the issues in that area. In 2012, Access partnered with CTS-FGV. For RightsCon Southeast Asia in 2015, Access joined with EngageMedia and the Foundation for Media Alternatives.