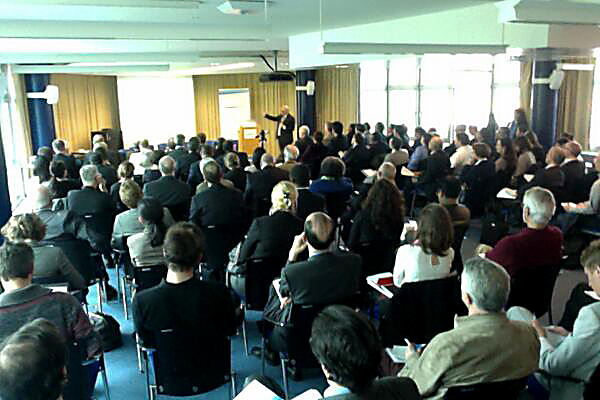 Report from the Launch Event

The Geneva Internet Platform (GIP) was inaugurated on Tuesday 8 April, with an engaging and dynamic discussion on global digital politics. It also included an Internet Governance (IG) Bazaar, featuring, among other things, the first Bitcoin ATM machine. The GIP is an initiative of the Swiss authorities that will be operated by Diplo Foundation. It is the result of two years of a consultation process initiated by Rudi Noser, member of the Swiss Parliament and Walter Steinlin, president of the Swiss Commission for Technology and Innovation, and coordinated by the Swiss Federal Department of Foreign Affairs

How to break down Internet policy silos was the question that echoed through the inauguration session, attended by 130 diplomats, business people and academics. The GIP should, as Acting Director General of the United Nations Office in Geneva Michael Møller indicated, start connecting dots among the venues where the Internet is discussed as an important factor in human rights, security, commercial and technological issues, among others.

Ambassador Alexandre Fasel opened the panel with this vision: 'today, as IG is at a cross-roads, Switzerland in its capacity as the host state of the UN here in Geneva, wishes to provide you with an impartial platform aimed at addressing all current questions relating to Internet. In doing so, the Swiss authorities wish to react to what we perceive as being an urgent need for the international community to address growing risks and vulnerabilities faced by Governments, corporations and citizens, while still ensuring digital growth and innovation. The GIP will act as an observatory on matters pertaining to the Internet, a capacity building centre, and a facilitator of all questions related to the Internet. Conceived as a neutral platform, the GIP will aim at bridging the gap between existing policy silos … be they technological, security, human rights, intellectual property rights.'

In his keynote remarks, Michael Møller welcomed the launch of the GIP as something that is filling an important vacuum in terms of IG. 'It’s crucial, timely and going to be very important to us as we move forward'. Møller also pointed out that today, in 2014, 60% of the world’s population is not yet online, illustrating the crucial importance of Internet and digital issues in discussions about post-2015 Development goals. Finally, Møller stressed that, 'effective Internet governance is not possible without engineers, civil society and business'.

In his keynote remarks, Philipp Metzger, Director General of the Federal Office of Communication of Switzerland, reminded the audience that, from the beginnings of Internet governance, Switzerland has always played a facilitating role, even before the first WSIS Summit in 2003. It has also funded, and been a long-term supporter of the Internet Governance Forum.  As we continue this role. Metzger  said, 'our vision of the future of Internet Governance, as Switzerland, is of an inclusive, responsive system where all stakeholders can find their needs, where they can make their needs heard, in particular the developing world. We’d like to see processes on Internet Governance that foster freedoms and innovation online, and build at the same time, a mutual respect, and share responsibilities with all stakeholders. Hopefully the GIP will contribute to that, but it is only a tool, one of the elements in the symphony of IG. It is an initiative to support the spirit of cooperation.'

The slides below give a summary of the the GIP project and objectives.

In his comments, Dr Jovan Kurbalija reflected that more than 50% of global IG is conducted in Geneva. He stressed that trust is the key element for successful Internet governance. We have over-emphasised the power of virtual and over-looked the power of proximity. This concentration of Internet players in one physical space is a great opportunity to build bridges among silos.

The introductory remarks were followed by an engaging debate actively moderated by Richard Werly, journalist from Le Temps.

12.00–13.00 An Internet Governance Bazaar: policy initiatives, training activities, and research projects of Geneva-based organisations. Refreshments and sandwiches will be served.

Video interviews with participants in the IG Bazaar

13.00–14.15 The Official Launch of the Geneva Internet Platform: a welcome address by Ambassador Alexandre Fasel, Permanent Representative of Switzerland to the United Nations in Geneva; keynote reflections by Michael Moller, Acting  Director General of UNOG and Philipp Metzger, Director General of the Federal Office of Communications of Switzerland; and the presentation of the Platform by Jovan Kurbalija, director of DiploFoundation. The discussion will be moderated by Richard Werly, journalist for Le Temps.

14.30–16.00 The presentation of data-mining tools for diplomatic negotiations and drafting: a practical example of processing 188 policy submissions into a draft declaration for NETmundial (São Paulo, 23-24 April 2014).