The Media’s Role in Advancing Peaceful, Just and Inclusive Societies 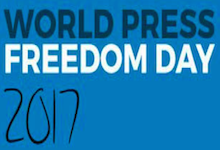 On the occasion of World Press Freedom Day 2017, the Permanent Mission of Greece to the UN and the UNESCO Geneva Liaison Office organised a panel discussion on ‘The media’s role in advancing peaceful, just and inclusive societies’. The session was opened by moderator Alessandra Vellucci, Director of the UN Information Service in Geneva, who introduced the topic and speakers, as well as this year’s theme: Critical minds for critical times.

After a short video message from UN Secretary General Antonio Guterres, Mr Abdulaziz Almuzaini, Director of the UNESCO Geneva Liaison Office, and H.E. Ms Anna Korka, Ambassador of Greece to the UN in Geneva, provided their opening remarks. They both highlighted today’s pressure on press freedom, and the disruptive role of digital technologies. Amuzaini quoted UNESCO Director-General Irina Bokova’s message on the occasion of WPFD 2017:

‘Facing a crisis of audience identity, journalism stands before a horizon where old challenges are merging with new threats. The media business is being shaken to the core with the rise of digital networks and social media…Online, the lines are blurring between advertising and editorial material, and we see private actors rising as key intermediaries, accompanied by new forms of ‘private censorship’. These challenges merge with deeper transformations affecting societies. The Oxford Dictionaries Word of the Year for 2016 is ‘post-truth’. Combined with the concept of ‘fake news’, questions are rising that go to the heart of free, independent and professional journalism.’

Keynote speaker Ms Kate Gilmore, Deputy High Commissioner for Human Rights, pointed out that apart from digital technologies’ transformative effects, there are also continuities, claiming that ‘neither technological advance nor market forces alter the fact that there is, and there always will be, an intricate relationship between press freedom, freedom of expression, accountability, social justice, and human dignity’.

A second keynote speech was given by Mr Stelios Kouloglou, former journalist and current Member of the European Parliament, who outlined the main reasons why media freedom is under threat more than ever – even though there is an abundance of news in the digital age:

Next, the panelists reflected on the topic. First, H.E. Sabine Böhlke-Möller, Ambassador of Namibia to the UN in Geneva, spoke about the establishment of the Windhoek Declaration and policies to promote press freedom in her country. Press freedom in Africa was further addressed by Mr Alain Modoux, Assistant Director-General of UNESCO for freedom of expression, democracy and peace, who had to recognise that the Windhoek Declarations’ demands are ‘far from being fulfilled’ and that the ‘freedom wind blowing from Windhoek has lost much of this force’, as the media landscape has become polluted by misinformation disseminated by social networks and search engines, without editorial control. H.E. Mr Thomas Hajnoczi, Ambassador of Austria to the UN in Geneva, echoed this message and identified a gap between the resolution and its implementation. Mr Guy Mettan, Executive Director of the Geneva Press Club, spoke about conflict journalism, and in particular the challenges of underreporting vs. overcoverage and forced moral categories (good vs. bad), pleading for neutral and balanced reporting. Ms Gabriela Sotomayor, UN Correspondent for REFORMA Newspaper, closed the panel discussion by highlighting the threats and violence against journalists in Mexico, arguing that on WPFD 2017, we have ‘nothing to celebrate’.

Finally, Vellucci summarised the discussion with a number of potential solutions to the challenge of preserving press freedom. At the national level, the state has to protect the freedom of the press and freedom of expression. At the international level, there could be an emerging discussion on a ‘global fund for press freedom’, an ‘international court’, or using the Universal Periodic Review as a forum to scrutinise press freedom in each country in a systematic way.