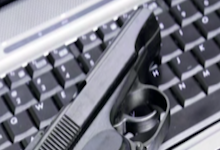 Mr Lukas Heckerdorn Urscheler (Deputy Director, Swiss Institute of Comparative Law (ISDC)) started by welcoming everyone to the event, which he described as part of the multistakeholder approach inherent in the work of the ISDC.

Dr Stephan Husy (Ambassador-at-Large for International Counter-Terrorism) pointed out that the online presence of so-called extremist groups is used for propaganda, financing, and recruiting. The Swiss government has adopted a whole-of-government approach, together with strong international public-private partnerships, when it comes to combatting extremist content online. He concluded that while online and offline extremism combatting measures are mutually dependent, the scale and speed of the Internet make it unique in addition to issues of attribution and jurisdiction.

Prof. Maura Conway (International Security, Dublin City University and Coordinator, VOX-Pol Project) outlined that while videos are the most visible, a significant part of ISIS’s online presence comes from the galleries of still photos together with written publications. These materials are well-made and available in multiple languages, and aim to portray ISIS as a utopia via non-violent material, proliferated through individual ‘crowd-sourcing’ methods and includes a variety of sub-communities based on gender and ethnicity. She concluded by stating that with the fall of the physical ISIS, the direction of their online presence remains unclear for now.

Dr Johanna Fournier (Legal Advisor, ISDC), presented a comparative legal study between five European states to look at the extent of their legal regulations in combatting extremist terrorism. While focussing on the issues of training, travelling, and financing, she concluded that there are differences among states in these areas in terms of how explicit states are in criminalising these terrorist activities online.

Mr Marc Porret (Officer, United Nations Counter-Terrorism Executive Directorate (UN CTED)), started by stating how the UN Security Council has added resolutions to combat terrorism, usually as a response to a major terrorist incident. Besides the regulatory and legal measures, the Security Council relies on providing a positive narrative. Moreover, offering assistance to member states together with the assessment of various implementation measures, is a significant part of the strategy. He concluded by stating the important role of other international organisations together with regional ones.

Dr Jerome Blomsma (European Comission, Directorate General Migration and Home Affairs) presented the EU Directive 2017/541 which seeks to prevent attacks by providing legal tools based on sanctioning and victim support. Online measures seek to criminalise the proliferation of violent extremist material while enabling member states to take down material. Such content has to show intent or incitement. He briefly presented the EU Internet Forum which brings together actors from the private and public sectors. Blomsma concluded that differences remain among companies when it comes to the rate and speed of compliance in taking down extremist online material, and implementation at national levels.

Ms Maryam El Hajbi (Specialist, the EU Internet Referral Unit (IRU), European Counter Terrorism Centre, Europol), started by pointing out how the Internet can be seen as the central tool to extremist groups, as it can be used to spread propaganda and for financial purposes by using cryptocurrencies. The IRU informs private companies when violent extremist material needs to be voluntarily taken down. They follow open source information while providing a platform for private companies and member states. El Hajbi concluded by saying that companies have differing capabilities of acting on recommendations.

Mr Adam Hadley (Director, Tech against Terrorism) stated that by relying on the ‘emerging normative framework’, they are seeking to build the capacities of small and medium sized enterprises (SMEs). When addressing harmful usage and content, they encourage transparent actions taken through terms of services, which respect end-users’ rights. In addition to platforms for propaganda and recruitment, it is important to address operational use. As part of their work, they are providing a ‘Trustmark’ certification to build trust. He concluded by adding that technology is also disruptive to the legislative processes.

Ms Lucie Krahulcova (Policy Analyst, AccessNow) outlined how confidence-building and governance mechanisms are essential to ensuring individual rights of access. She pointed out that taking down online sources together with increasing the role of law enforcement, can embolden extremist actors. The latter is also evident in the spill-over of ‘terrorism’ into policy and regulatory texts. This occurs simultaneously with decreasing the access of the civil society actors, while the criminalisation of hacking together, with automated mechanisms of taking down webpages, are challenging individual freedoms.

Mr Lukas Heckerdorn Urscheler (Deputy Director, ISDC) provided an overview of the approach of Council of Europe countries, which have regulations ranging from general regulations to specific provisional issues. This impacts the degree of the national implementation process. However, applications must have a legal base, legitimate aims and must be necessary for a democratic society to achieve security aims. After presenting various country approaches, the speaker concluded that there remain diverse approaches to critical issues, such as the role of state action, measures of redressing, and safeguards.

Dr Nikolas Guggenberger (Assistant Professor, University of Münster, School of Law) presented the new German network legislation which aims to fight ‘fake news’ and remains indirectly applicable to combatting terrorism online. Due to the scope required in order to be counted as a social network, it applies to bigger social network companies. In order to enforce material taken down, the legislation allows regulatory fines for failures to do so. The fine is mostly based on the process and set-up of the platform. He finished by stating that it is an unconstitutional and inappropriate privatisation of law, and that instead, there should be more resources to law enforcement and the judiciary.

Mr Tobias Bolliger (Senior Advisor, Swiss Federal Police Cyberunity) outlined how the Swiss police maintain an information and reporting system which incorporates information from individuals together with existing international co-operation. Due to the fact that almost all of the cases originate outside Switzerland, the federal police emphasise the need for international private-public co-operation.

Mr Oliver Leroux (Juge d’instruction, Maitre de conferences, University of Namur) outlined how terrorist criminal offence remains an area of broad legislation in the context of Belgium. He pointed out that in Belgium, the police can maintain online ‘patrolling’. While the police can undertake cyber-measures, these are based on strict legislative measures. Court-based rulings oblige Internet Service Providers (ISP) to block access and enforce sanctions. He concluded that a legal framework exists, but in practice it continues to be a complicated issue.

Dr Sharri R Clark (Senior Advisor for Cyber and Countering Violent Extremism, US Department of State) stated that the US does not request ISPs or platforms to take down material unless they are tied to child pornography or drugs. The US government focusses on counter-narratives while co-operating with the private sector and multilateral forums on voluntary and self-regulatory basis. Even though the US supports the use of automated tools for combatting terrorism online, these measures must respect individual rights and must not violate the US law. In conclusion, she said that resilience of the youth remains essential.

Dr Kyungho Choi (Research Fellow, Korea Legislation Research Institute) highlighted that South Korea does not possess a specific anti-terrorism bill due concerns about the protection of private individual’s rights and implications to wider public security, cybercrime and terrorism are largely approached from the general legal provisions.

Professor Solange Ghernaouti (University of Lausanne; Associate Fellow, Geneva Center for Security Policy (GCSP)) pointed out that blocking webpages is not a long-term solution because technical capabilities exist which enable circumventing them and accessing material.

Mr Kristian Bartholin (Deputy Head of the Counter-Terrorism Division and Co-Secretary to CODEXTER, Council of Europe) pointed out that there are multiple view of the notion of ‘freedom of expression’, as provided in the European Convention on Human Rights. However, if material can be seen as a threat to democratic society and rule of law, then it can be blocked. Internet Referral Units are a pragmatic solution, but their actions and referring should be accountable. He pointed out that instead of defining terrorism, certain actors or actions could be labelled ‘terrorist in nature’.

Dr Christina Schori Liang (Senior Programme Advisor and Senior Fellow, Emerging Security Challenges Programme, Terrorism and Organized Crime Cluster Leader, GCSP) highlighted how organised crime and terrorist activities are increasing in volume due state fragility, and are becoming increasingly present online. Nonetheless, a key for preventing radicalisation online is greater inclusion of the youth in decision-making and intellectual counter-narratives. Despite the challenges, the youth across the world are increasingly pushing back against cyber-crime and terrorism.

Ms Maryam El Hajbi and Ms. Krahulcova pointed out that counter-narratives alone are not sufficient but need to be in conjunction with other mechanisms in a broader context.

Dr Richard Hill (Vice Chairman, external affairs, Swiss Chapter of the Internet Society) emphasised that terrorists seek to spread fear, and that the best counter-action is to put things into context. However, such measures are ineffective and counter-productive when pop-up advertising exists. He concluded by stating that it would be important to have privacy rights codified at an international level.

Dr Bertil Cottier concluded by stating that due to the fragmentation and privatisation of international legal frameworks, the effectiveness of measures and co-operation remains limited.