The good, the bad and the ugly; online gender violence

Over the last year, progress has been made from a policy perspective on online gender violence. In June 2022, the White House launched a task force around gender online violence, and G7 governments have focussed on the subject as well. The European Parliament has continued to call for measures to counter violence against women and the LGBTQ+ community and welcomed this year’s European Commission’s proposal that will criminalise cyberviolence, including non-consensual sharing of intimate images and cyberstalking.

The scale of the problem of online gender violence is not yet sufficiently discussed. Women and girls are disproportionately victimised online, remaining the primary target for gender-based violence. Victims find it difficult to obtain support as they are dealing with negative backlash from both males and females. This is when online gender violence becomes a much broader societal discrimination issue and violation of human rights.

Is the internet a safe place for women? Digital technologies have amplified abusive behaviours such as stalking, by providing tools for abusers to access their targets. Women are considerably more likely to be victims of repeated and severe forms of technology-assisted online harmful actions. In order to bridge the gender digital divide, all stakeholders need to consider online gender violence.

At the Digital Rights Foundation, one of the primary works is addressing online gender-based violence through training, legal advice, and mental health support as well as training sessions around the world regarding online safety. It was shared that up to 70% of online harassment cases were reported by women. The main goal of the foundation’s helpline is to make women and girls safer and make them more confident and educated about how to protect themselves online.

Women’s Safety Hub at Meta addresses safety and works to end gender-based violence online through a comprehensive approach by implementing policies and partnerships with 850 safety organisations around the world, activists, and NGOs. The hub is striving to strike the right balance between having one global set of policies and taking into account the cultural and contexted nuance that may differ from country to country. There is an effort to get better at identifying hate speech in all languages and to take it down before anyone sees or reports it. Recently, the hub concluded a series of women’s safety round tables worldwide where over 350 women’s safety organisations spoke about where they want the hub to continue striving, tools they would like to see implemented, and policy changes they would like to see considered.

There was a question raised on how to achieve equal online participation of women and girls without fear, abuse, or harassment. This is seen as a collective responsibility, but different opinions were given. The solutions were seen in law enforcement, as opposed to another opinion that as much as we need law, at the same time, we have seen laws being interpreted in a wrong manner. Other opinions included working on prevention from the beginning, as well as empowering women and girls not to care about what men are saying about them online. In response to this, there was a debate on how to address this issue for male perpetrators as well. Another response was to encourage local solutions, addressing different contexts, but also global solutions on a larger scale. Women and girls must be educated on how to protect their privacy and ensure that they have developed safety protocols to protect their information and their account access. 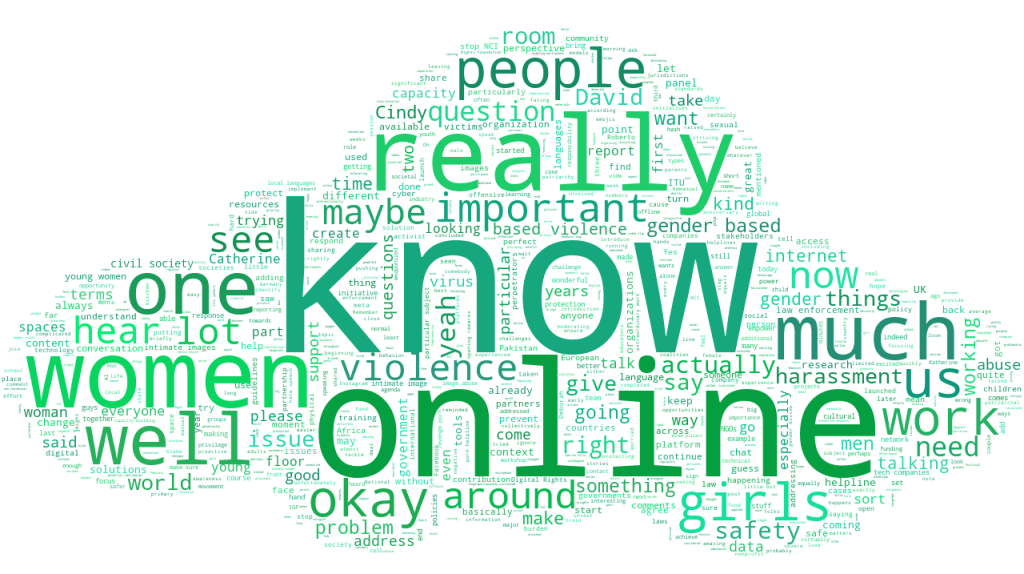