Are African voices heard in global digital policy? The short answer would be not as much as they should. It is not that they are non-existent, but they do not reflect the size of the continent in terms of the population and future digital opportunities that are ahead of Africa. However, Africa has played a unique role in developing global internet public policy, starting from 2005 and the Tunis phase of the WSIS, to this year’s IGF, which is the third IGF on African soil.

Strengthening African voices in global digital governance requires strengthening the region’s representations in three specific tracks – intergovernmental (e.g., UN), multistakeholder (e.g., IGF) and nongovernmental. Enhancing the voice in the latter is perceived as challenging as African and other developing countries do not have equal presence in large companies and international civil society organisations, which would reflect, defend, and promote Africa’s voice within that track.

Arecent report published by Diplo on ‘Stronger digital voices from Africa: Building African digital foreign policy and diplomacy’ provides a snapshot of Africa’s digital diplomacy, drawing on lessons learned, good practices from Africa and beyond, and some of the underlying challenges to be addressed through ‘whole of government’ and ‘whole of society’ approaches.

Africa finds itself amid the so-called ‘digital cold war in the making’, which is shaping the environment in which Africa contributes to global digital policy. Africa, therefore, has to position itself smartly to maximise its development potential and avoid risks. To address the challenges and maximise its potential, Africa needs a holistic approach to activate all possible resources for representation. The sheer number and variety of digital policy issues require the involvement of all actors across and beyond the national spectrum. To this end, the speakers also highlighted the important role the diaspora plays in increasing the African impact on digital.

The study also provides an in-depth assessment of how Africa positions itself on a number of digital policy topics, from telecommunications infrastructure, data, AI, and cybersecurity, to development and sociocultural issues such as multilingualism and digital identity, focusing on eight countries. For instance, it was concluded that Africa is moving well on digital infrastructure with more and more cables being deployed. It is moving rather slowly on frontier technologies and issues such as cybersecurity and cybercrime and the digital economy, which are of paramount importance to Africa, although it has made significant progress in the past years (e.g., mobile banking). That said, it is doing rather well on sociocultural issues such as digital identity.

Finally, the study addressed the cooperation of African countries with major global actors, such as the EU, China, the USA, and India, but also international organisations and digital hubs, such as Geneva. One of the important findings is the lack of African representation in standardisation processes in Geneva which is reflected in the number of chairmanship positions in committees and working groups of standardisation organisations.

African voices need to be heard not only to pursue African interests, but also to ensure a more stable, safe, and prosperous internet. Because a stable and prosperous global digital space is contingent on Africa’s meaningful participation. To achieve this, Africa needs to learn from other countries and actors, but it cannot simply replicate the solutions developed for other regions. Africans need to ensure they are involved in the design of their infrastructure. What Africa needs is an open infrastructure, as there is no single technology that can address all problems on the African continent.

In developing an African approach to digital, it is essential to start from a solid base which could be found in the Tunisia and Geneva outcomes and G77 negotiations, rather than from scratch.

Increasing research capacities and academic programmes in the field of diplomacy is equally important, and Diplo has played its part by recently providing training for Namibian and Rwandan diplomats. Other speakers also highlighted the need to mainstream (digital) literacy to create a critical mass of citizens that are consuming services and products on the internet value chain. This is where the importance of mentorship comes into play. The speakers reflected on community networks built around mentorship and the grassroot movements.

The role of communities of practice has also been noted, as they can ensure a stronger representation of African interests in global digital discussions. While training is important, sustainable impact is created through institutions, within the African Union, national government, or universities.

The speakers also tackled the issue of the lack of ‘buy-in’ from African policymakers for digital transformation and technology. That said, progress has been made in engaging African parliamentarians with creating the African Parliamentary Network on Internet Governance (APNIG) during the African IGF in Malawi. There is a hope that through capacity development on local and relatable digital policy issues and greater engagement, digital will become a priority for policymakers across the region. 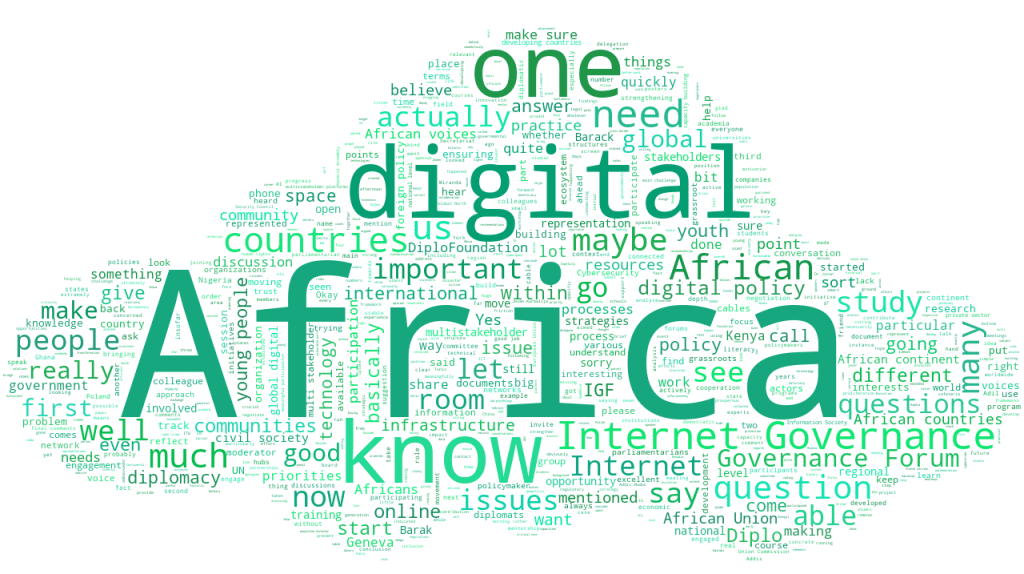