Internet shutdowns across the globe have led to an increase in human rights violations, while also affecting society, the economy, and education. Oftentimes civil societies respond rapidly, but with lack of expertise. This session presented the National Internet Shutdown Need Assessment Reports from Bangladesh, Senegal, India, and Tanzania, showing findings of internet shutdown advocacy and presenting recommendations for enhancing prevention and response.

Bangladesh has experienced 17 internet shutdowns since 2012, and it is expected that another one will occur in 2024 as elections are coming. The most common justifications from authorities are that shutdowns take place for security reasons, technical problems, or to prevent the spread of disinformation. Findings, however, show that shutdowns do not prevent the spread of disinformation. Instead, participants state that the inability to access the internet increases the spread of rumours and makes it difficult to distinguish fake from real news. Additionally, it is shown that the economy and online speech are affected, while the most affected group is IT workers. Documentation of the consequences of shutdowns is a significant aspect in enhancing the argumentation against them. Considering the lack of technical training, it is imperative to enhance capacity skill building and create educational programs dealing with digital rights issues.

The most recent internet shutdown in Senegal was in 2021, but due to a lack of clear data, it was impossible to document it properly. Very little awareness exists among civil society groups, while most participants stated that they do not know how internet shutdowns occur technically or legally. While a significant worry about shutdowns is already shaping up regarding the presidential election in 2024, respondents reported that they are unprepared to respond. Therefore, it is significant to enhance technical capacity, raise awareness, and ensure the implementation of effective regulations.

In India, 106 shutdowns were reported in 2021, making it at the top of the list of countries experiencing internet shutdowns in a year. The research was localised in four co-designed workshops where people from diverse communities and of diverse genders participated. It was found that internet shutdowns had disproportionate consequences, as different experiences were reported from people who lived in different cities of the same state. While a high percentage of awareness of circumvention tools was reported, most of the respondents did not know how to use them. It is significant to expand advocacy efforts beyond the digital rights activist sector. Additionally, capacity building around measurement, enhancement of technical expertise, and documentation are essential in combating internet shutdowns.

The first major shutdown that Tanzania experienced was in 2020 during and after the presidential elections. This included SMS bans, internet filtering, and platform shutdowns; while restrictions were lifted it is uncertain if easement would prevent future shutdowns, as existing laws target the press and human rights activists. The report shows that awareness is high, but the difference between government-ordered shutdowns and technical difficulties is unclear. Additionally, only a narrow understanding of network measurement tools and how they could be used is available. Thus, developing legal expertise and building legal strategies, while also ensuring technical training for stakeholders, are among the recommendations for addressing shutdowns.

The main outcome is that lack of technical capacity, low documentation, and little awareness hinders the prevention of shutdowns. The inclusion of governmental authorities in enhancing documentation was debated, as in some instances governments deny supporting such initiatives for political purposes. On the other hand, it is believed that this may be the only way to achieve regulatory change. What should be borne in mind is that internet shutdowns are repressive, and if action is not taken human rights violations will continue to occur. 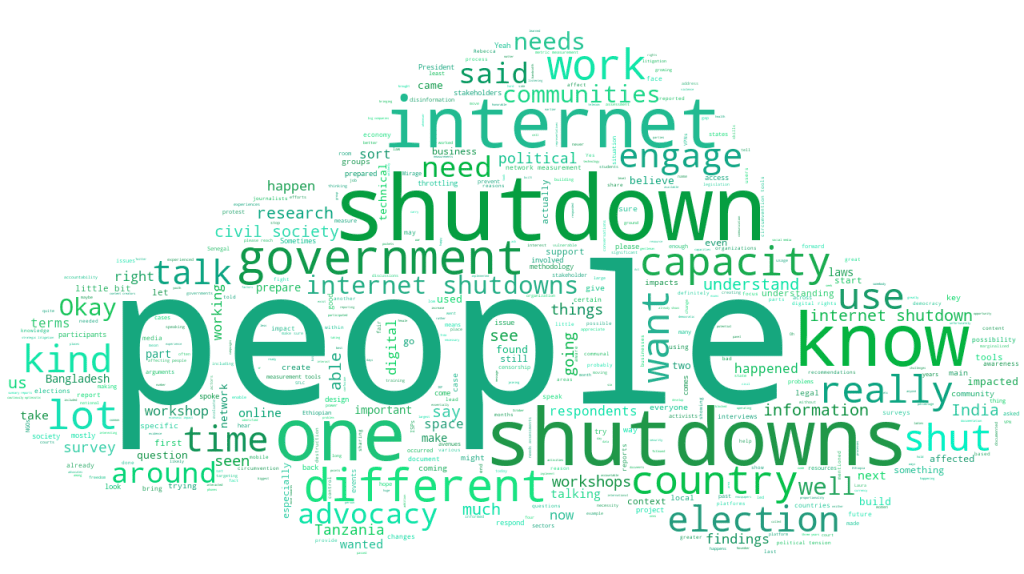