The session discussed the future benefits and challenges of internet access provisions for large systems of low Earth orbit (LEO) satellites. Companies such as Amazon, SpaceX, Telesat, and OneWeb are already launching LEO constellations, and countries such as China, the USA, and the EU are developing new regulations around LEOs. Questions of affordability, capacity, robustness, and global regulatory framework were discussed.

The Internet Society has instigated the discussion on LEOs and their potential value. LEO satellites can provide a low-latency high-speed connection and bring access to places unable to be connected through traditional geostationary satellites. These can be ships, airplanes, rural regions, and areas affected by certain crisis when loss of infrastructure occurs. The potential benefits of bridging the global digital divide are significant, and LEOs should be discussed in the context of regulating broadband, spectrum, national and international space law, as well as power relations between private and public developers.

What is the current regulatory status of LEOs? Private enterprises undertaking these projects, such as SpaceX and OneWeb, are subject to domestic laws and regulations in all phases of their development. Most licensing and authorisation procedures happen at the pre-launch phase. Rules and regulations about the in-orbit and end-of-life phases are primarily an expansion of the oversight, and control responsibility of the states. The provision of satellite services in a particular country is subject to that country’s laws and regulations as ‘landing rights’. They include the authorisation to set up ground stations, use frequency spectrum, service provider licenses, and import and export regulations. Some countries like Russia and China have already decided against allowing broadband provision by foreign service providers based on national security grounds.

On the other hand, the EU allows foreign enterprises to provide services within their borders. The EU not only aims to harmonise the regulation of LEO broadband in an efficient manner, but it would also like to see itself as a competitor in this emerging sector. If we want LEO satellite constellations to fulfil their promise to bridge the digital divide, regulatory barriers need to be considered one by one, and discussed by all the regular stakeholders at all domestic levels.

At the international level, the most relevant are the obligations under outer space law and international regulation. States will have an obligation and liability to ensure safe practices in outer space. The International Telecommunication Regulations (ITRs) are of the utmost importance for LEO satellites because they communicate with Earth through radio waves. The International Telecommunication Union (ITU) has long been tasked with the coordination of orbital space and the spectrum among nations, which is a limited natural resource.

While regulation exists, individual states and regions are noticing the potential policy issues that come with services like SpaceX and Starlink. A further harmonisation of regulations that provide insurance and clear liability is necessary to connect the unconnected in a fair and equitable way.

In Africa, about 40% of the people live more than 25 km from a fibreoptic node, making connectivity an issue. Bringing connectivity to them is at the edge of profitability because terrestrial fibre cables become expensive for such distances. LEOs present a unique approach because they can come in from the sky directly, targeting the community that needs connectivity.

But what are the challenges? Concerns arise around affordability due to their high fixed cost, the capacity to connect a set number of users with various needs, data localisation laws, taxation regimes, licenses, and permits to operate locally. The issue of debris generated by satellites is also attracting more and more attention.

One potential solution is a unified approach to licensing and regulation across multiple countries, as opposed to each individual country trying to have a different one for each service provider. The second is advancing regulations on complementary access solutions.

It was also mentioned that, in the long run, we might have a multi-orbit multilevel internet, including terrestrial connectivity and LEOs, as was presented in the Hybrid Space Architecture Programme of the US government’s Defense Innovation Unit (DIU). 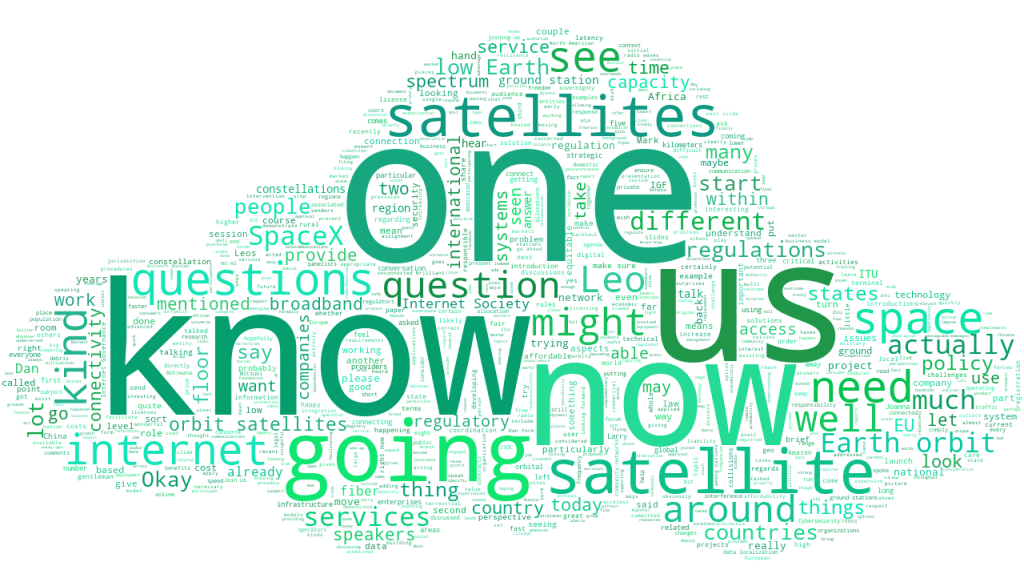