Digital identification infrastructures are increasingly used by governments to provide essential public services. In certain cases, as in Uganda, a digital ID is necessary to access public health and education, both critical in reducing poverty and improving livelihoods. However, while already deployed, these systems are challenged by an unclear division of responsibilities between corporate and public actors, lack of enforcement, lagging inclusivity, and even the central question of their desirability in the first place.

Obligations and accountability of corporate actors beyond ensuring that digital ID systems are up and running is unclear. Implementation is often by corporate actors based in Europe and North America without due diligence for consequences for human rights. It is especially problematic that global technical giants such as Google or Facebook enter the partnerships. Procurement tends to be shrouded in national security protection arguments leading to unclarity about the stakeholders and accountability to the public. The state as a consumer of digital ID systems has the unique position of power over the public and even violence through policing, but also in the provision of social services. This monopoly is enhanced through mandatory digital ID systems that citizens cannot opt out of.

Systems are often designed to exclude groups of population. If someone does not provide biometric data and proper documentation for the digital ID, they are effectively shut out from government services, be it education, health care, or migration. Especially in the case of cross border movements, a phenomenon very common in Africa, large groups of vulnerable people are at risk. These communities have historically suffered marginalisation and inadequate access to resources, and digital IDs can wrongfully be demanded even for food rations at border camps or other basic services.

Access is also a problem for digital IDs. Large segments of the population, especially in rural and farming areas, lack connectivity to create an ID, but also face simpler issues such as inability to provide fingerprints due to the effects of hard farming labour on their hands. The issue becomes more complex when digital IDs get intertwined with access to government funds or when citizens are unable to provide biometrics for mobile banking to receive social aid.

The panel agreed that the use of digital IDs as a cutting edge technology is often very far from the reality of life and needs of people. Instead, they tend to reproduce risks of control and domination already started with bureaucracy and categorisation of people during colonial times. It was mentioned that the use of digital IDs for social security is not distinct enough from use for national security. One of the most absurd exceptions to limiting human rights is the argument of security that allows for the over-reach of digital IDs. In Europe the push for a digital ID is following the period of COVID passes and a risk evolves that different data, health, financial, personal, are insufficiently separated.

What is needed for digital ID systems? First, human rights due diligence processes need to be mandatory and a minimal threshold of protecting personhood should be set by international and national legislation. Because a digital ID is a dual use technology, cross-sectoral alignment, for example between health or public security, needs to be clearer on what private data is actually beneficial for which public purpose. This means, secondly, that the intention and the purpose of the system has to be made clear. One arm of the government is always pushing for the ID more than others, so a parliament has to have a strong oversight voice in pushing back and ensuring the respect of human rights. Ensuring nondiscrimination through specific legal provisions would be useful to ensure that people are included in public and social services, even if they chose not to use their digital ID. Third, the political narrative should question the imminent introduction of digital IDs and privacy by design. Lastly, more involvement is needed from the public to know their needs. Digital IDs are currently a game of ping-pong between corporate and public actors, leaving the citizen in the middle and voiceless. 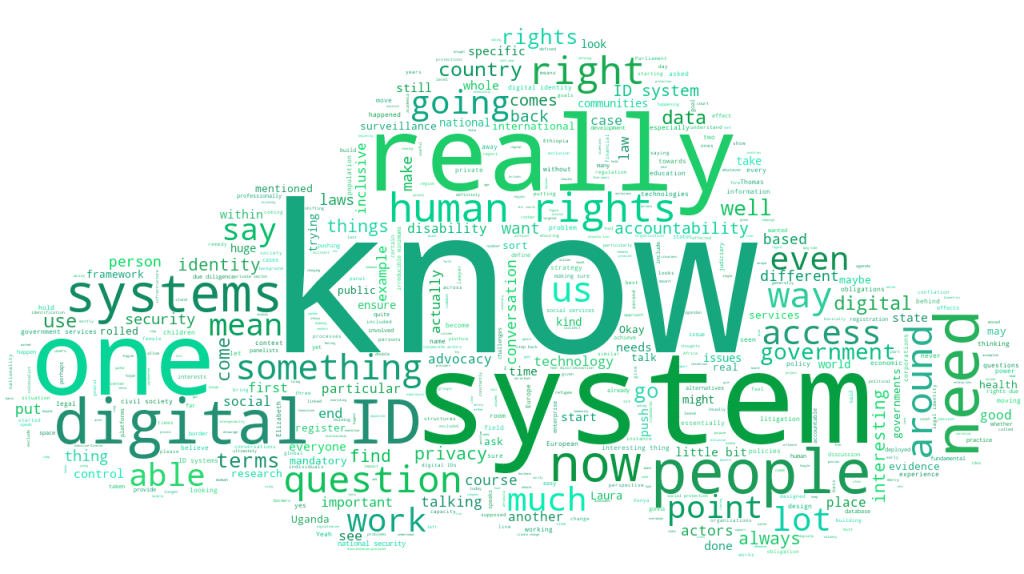