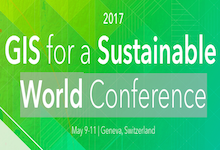 The conference was opened by Mr Einar Bjorgo, Manager of UNITAR’s Operational Satellite Applications Programme (UNOSAT), who focused on the question of how to use geospatial technology to better communicate with practitioners. He stressed the need to accept the possibility of failure and the importance of exploring new tools, such as drones and augmented and virtual reality applications, and their potential for sustainable development. In particular, he spoke about the utility of virtual reality applications that are based in geospatial data, and aim to ‘transfer’ decision-makers to certain areas, to see for themselves what it looks like.

The first session of the day explored some innovative uses of GIS (geographic information system) technology. First, Mr Mohamed Ramadan, consultant to the president of CAPMAS, the national statistics agency of the government of Egypt, demonstrated the Egyptian Geospatial Information Portal, an open geospatial database that maps economic and social developments in the country. The portal was established in co-operation with the Environmental Systems Research Institute (ESRI) and the World Food Programme, and Ramadan spoke about the challenge of bringing together the technical developers of the portal and the economists and statisticians that analyse the data. Therefore, there is a need for capacity-building and know-how in the government to develop and repeat similar projects at different government institutions, in order to make the project sustainable.

According to Mr Clint Brown, Director of ESRI, maps have radically changed our understanding of the world, and enabled us to work together to explore, understand, and take action. Now, a new type of web and cloud-based GIS is emerging. It allows for collaboration and data sharing across organisations and communities, and allows for the construction of ‘a collective GIS of the world’. Maps can now be interactive and continuously updated, in 2D, 3D, and in augmented or virtual reality. Ultimately, the rationale is that a better understanding can lead to better action. Mr Adam Pfister, Solutions Engineer at ESRI, referred to the utility of using ‘story maps’ to better communicate a social or environmental problem, such as wildlife conservation, women’s rights, or climate migrants.

Next, Ms Kimberly Roberson, Chief of Field Information and Coordination at UNHCR, provided a practical example of how GIS informs her work, as it helps to better understand a situation, to reunite points of view and perspectives, to make ‘the invisible visible’, to consider space as a variable of understanding, and to expose gaps in information and experience. She spoke about her experience in Eastern Zaire in the 1990s. During the search for refugees that were on the run, UNHCR had no proper way of locating them, as there was a lack of knowledge to understand where they might have gone. Later research showed that this could have been predicted through a GIS analysis that combined data on roads, population centres, agricultural terrain, waterways, elevation, and the maximum daily walking distance. Furthermore, UNHCR’s Camp Information Management System provides a set of GIS-based applications to map, plan, and manage refugee camps.

Ms Wendi Pedersen, GIS Solutions Advisor at the Geneva International Centre for Humanitarian Demining (GICHD), demonstrated the PriSMA (Priority Setting Tool for Mine Action) application, developed by the GICHD, which makes ‘priority setting more accessible for decision makers in mine action’. The application integrates the preferences of stakeholders to make decisions on the allocation of resources and operations to clear hazards. By inserting indicators and their weights (e.g. the presence of schools, medical facilities, or population areas), the map shows the high-risk areas that would be most impacted by a hazard.

Mr Ravi Shankar, Technical Officer at the World Health Organization, provided an example of the use of GIS in polio-eradication. The great risk of polio contamination means that timely monitoring of vaccination programmes is essential. While traditional survey methods take extensive time and resources, GIS solutions, like Survey123 and mobile technology, can provide real-time feedback in insecure and hard to reach areas. As such, they were able to do the analysis, identify unvaccinated children, and communicate to decision-makers for necessary action.

Mr Lars Bromley, Principal Analyst and Senior Advisor at UNOSAT, talked about the daily work at his organisation, which is dedicated to applying existing geospatial data solutions for UN and NGO partners. For example, it confirms and documents political violence, it maps areas that are inaccessible for humanitarian planning, and it provides a repeated analysis of refugee settlements. With an example of the expansion of the Zaatari refugee settlement in Jordan, Bromley showed a 3D simulated version of the camp. These types of images can be used for virtual reality and be complemented with game effects to train future staff and inform the public. However, obstacles to these sophisticated activities remain, as the product might be ‘cool, but not useful’ and require a lot of time and effort to create.

The Q&A that followed addressed a wide range of topics. The first question related to the balance between sharing information and data protection, and it became clear that within many organisations, there is much uncertainty among staff as to what they can and cannot share. Roberson proposed starting discussions – not with requests for data – but with how to work collectively to tackle a problem, as data sharing requires trust-building. Ramadan added that one solution could be to use data that has already been published and is publicly available, and then to provide the added value.

Another participant raised the question, ‘should GIS analysis move from “where are things?” to “where will things be?” and “where should things be?”’. Bjorgo explained that although there are many technical solutions for forecasting, UNOSAT does not have the budget or staff for new, sophisticated analyses. Roberson added that there is often an institutional problem of inflated expectations on the managerial level, which needs to learn to ask the right questions to the data analysts. Brown agreed that this is a major challenge that needs to be addressed by educating the next generation workforce and giving them the tools and techniques to take a sensible approach to data analysis. Pedersen added that there is a shift in the current mindset, from thinking about GIS as an aim in itself, to approaching it as a tool to provide information we need to know, and how end-users can apply and digest this information.

After the lunch break, there was a presentation of AuGeo: augmented reality for GIS. Augmented reality, anchored in geospatial data, can reveal hidden information and provide contextual information to whatever we view in the world around us. Examples of future applications could include the ability to view end-products on construction sites, to locate objects and people in emergency settings, and to identify where buildings were before a disaster struck.

The second day started with three examples of the innovative use of geospatial data. The first presentation was given by Mr Ulf Mansson, Project Manager at SWECO. He spoke about the interplay between geospatial data and games, such as Minecraft, and how this is being used for city architecture and urban planning, as well as by UN-Habitat. According to Mansson, the main challenge relates not necessarily to the technical aspects of merging the gaming and GIS communities, but to the difficulty of uniting two different organisational cultures.

Next, Mr Yves Ubelman, Founder of Iconem, presented his work in the Middle East on digitising cultural heritage sites that are threatened by disasters, looting, urbanisation, and conflict. With the help of drone technology and photogrammetry, they are able to reconstruct photorealistic 3D images of such sites. Mr Jeff Baranyi, Emergency Management Technical Lead at ESRI, talked about ESRI’s work to help people get geospatial data in times of need, for example – in the aftermath of the Nepal earthquake or during the European refugee crisis. This includes maps that help people identify which homes have been destroyed, that assist emergency response workers to assess the potential impact on people and populations, and story maps that can present the disaster to the public. ESRI furthermore conducts initial damage assessment through crowdsourcing and smartphone technology, through which citizens and aid workers report on the situation on the ground.

After the panel, there were two rounds of interactive discussions. The first round focused on new options for data and workflows, divided into the topics of field data collection; patterns of WebGIS; and Common Operational Data in humanitarian organisations. The second round was about how to best communicate your work, and included discussions on real-life examples of good information products; story maps; and web application builders.

The day ended with two sessions that highlighted the potential for ESRI’s ArcGIS Platform, including the new capabilities of the platform, their utility in exploratory data analysis, and their contribution to open data.