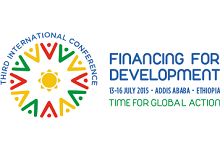 The Third International Conference on Financing for Development will gather high-level political representatives, including Heads of State and Government, and Ministers of Finance, Foreign Affairs and Development Cooperation, as well as all relevant institutional stakeholders, non-governmental organizations and business sector entities. The Conference will result in an intergovernmentally negotiated and agreed outcome, which should constitute an important contribution to and support the implementation of the post-2015 development agenda.

The scope of the Conference is set out in General Assembly resolutions 68/204 and 68/279, and will focus on:

The intergovernmental preparatory process of the Conference was launched on 17 October 2014. It includes a series of substantive informal sessions and informal interactive hearings with civil society and the business sector through March 2015, as well as drafting sessions on the outcome document in January, April and June 2015.