Fake News: The Role of Confirmation Bias in a Post-truth World 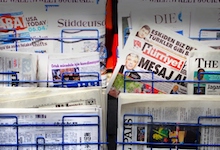 Society is becoming more and more polarised. Around the world, the attitudes, beliefs and opinions expressed by political leaders, their constituencies and the media appear to be growing more extreme. But to what extent is this just a natural and expected result of the human condition?

This was the topic of a discussion guided by Mr Rolf Olsen (CEO and strategic counsel at Leidar and teacher at the Graduate Institute, Geneva.)

Olsen started the discussion by highlighting the importance of the phenomenon of fake news. Politicians and leaders are no longer in control of their message, and the interference by external events and messages ‘has become the new normal’. With the increasingly blurred line between true and false, fake news is not just a ‘PR-problem, but a democratic problem’.

Although fake news itself is not new, the scale of its dissemination is. And while the ‘most powerful enemy of fake news is a strong press corps’, the media has fewer and fewer resources to check and prevent fake stories. The financial pressure on journalism often leads to quick writing and sensationalist headlines. In addition, the social media echo chambers allow fake news to reinforce fake opinions.

Fake news comes in many facets, affecting society as a whole. Some of its varieties include:

Dealing with this challenge could be done at the individual level and at a societal level. Olsen encourages individuals to rebut false information; to support the free press with paid subscriptions; and to participate in political dialogue. As a society, Olsen pleads for:

After Olsen’s introduction, there was a lively discussion on the complexities of fake news, journalism, and democracy. The importance of critical thinking was emphasised, and so were the intricate link between democracy and fake news, and the new challenges for journalists.