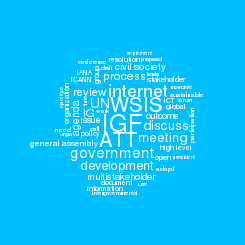 The session, moderated by Jaroslaw Ponder, ITU, touched upon a wide range of topics: acceleration of connectivity and growth, modalities for reaching the last mile, capacity building efforts, approaches toward guaranteeing the realisation of human rights, and possible next challenges, priorities, and directions.

Malcolm Johnson, ITU, gave a general overview of ITU’s activities, especially in relation to WSIS action lines C2 (Information and communication infrastructure), C5 (Building confidence and security in the use of ICTs), and C6 (Enabling Environment).  Particular tools and activities were mentioned: the WSIS-SDG matrix, the Interactive transmission map, the ITU Academy, the Global Cybersecurity Index, and a focus on child online protection. Johnson emphasised the ITU’s cooperation with other UN agencies and active participation in various forums and discussion platforms.

Minister Anusha Rahman Ahmad Khan, Pakistan, focused on the question of how to successfully facilitate broadband adoption, based on the example of her country. Khan stressed the importance of mutual learning and praised the guidance role of the ITU in this process. Suggested steps for other countries were: 1) to provide infrastructure by using specific funds and national resources (spectrum auctions, universal service funds etc.); 2) to educate and train people on how to utilise infrastructure (for example by building telecentres), and 3) to adopt enabling regulations and policies that benefit not only underserved and unserved areas, but also unserved citizens such as those in schools and hospitals. Another important aspect is to support e-commerce, Khan added. With reference to C5, Khan shared her concerns that discussions on human rights and the fight against cybercrime are taking place in silos. Khan urged actors to connect these debates and to bring people together. Khan suggested that some countries are moving from an era of democratically taken decisions to an era where corporations take decisions, and she raised concerns that some NGOs are paid by private companies with a goal to obstruct discussions. She asked other agencies, media, and institutions not to use data from uncertain sources.

A view of a regulatory authority was presented by Magdalena Gaj, Office of Electronic Communications, Poland. Gaj suggested that regulators should stay in the middle between governments and telecom operators, and use soft regulation tools, acting rather as a partner. Gaj talked about the importance of mapping the broadband infrastructure, which could facilitate easier decision making for operators  and other business actors. Ms Gaj concluded that broadband and fibre ‘streets’ are almost more important than traditional roads.

Shri J.S. Deepak, Ministry of communications and IT, India, shared India’s experience with regard to broadband penetration and ICT literacy. Deepak described a flagship programme, Digital India, and some of its pillars. He then reflected upon some challenges his government is trying to address. These include improvement in cybersecurity, content and language issues, start-up support, and digital literacy, together with women’s empowerment.

Challenges for countries that are both developed and very well connected were shared by Anne-Sofie Van De Velde, Ministry of Development Cooperation, Digital Agenda, Telecom and Postal Services, Belgium, who also raised concerns that the discussion on trust is taking place too much in silos, and that rights online and offline should be treated equally. Skills, regulatory frameworks, and an accountable government are seen as three main elements that will be put forward in Belgian development cooperation efforts, and in strengthening the Belgian Digital Agenda.

The position of broadcasting companies was presented by Giacomo Mazzone, European Broadcasting Union. Mazzone described activities of his institution in the area of digital society, and reminded the audience that the broadcasting infrastructure has reached almost 98% penetration of the world’s population, and should be utilized for connecting citizens. Among other challenges, he mentioned the transition to digital terrestrial broadcast in developing areas of the world.

Cyril Ritchie, CoNGO, talked about the role of civil society today, when the multistakeholderism approach is more or less broadly accepted. Ritchie focused his speech on the aspect of trust, and noted that trust is more likely to be achieved in an open environment of shared ideas and values. He drew a parallel between Machiavelli’s components of society (the prince, the merchant and the citizen) and compared them to today’s relations between government, business, and civil society. Ritchie suggested that trust would be enhanced and an enabling environment would be better achieved, if some international covenants were ratified and better implemented.

A predictive insight into future strategic issues was provided by Jovan Kurbalija, DiploFoundation. Dr Kurbalija focused his speech on the experience of his organisation in capacity building. He suggested that the digital policy community should move from a traditional approach in trainings, which is focused on individuals, to capacity building focused on institutions and countries. Real impact is achieved only if there is a broader setting. Dr Kurbalija then tackled the question of trust, by saying that it cannot be built quickly by one decision, but such a process needs time, and different  discussion forums should help to achieve this. Dr Kurbalija concluded: ‘genuine capacity development, inclusion, and careful trust-building are the safe ways to impact future development in constructive and creative ways.’