Introductory Session: Exploring the challenges The introductory session expanded on the role of transport and logistics in promoting e-commerce and was led by Ms Shamika Sirimanne (Director, Division on Technology and Logistics UNCTAD). She highlighted that most e-commerce is based on business-to-business (B2B) transactions and that there is still a relatively low amount of cross-border trade. Sirimanne explained that according an UNCTAD study trade logistics priorities – especially for developing countries – revolve around topics such as low shipping costs, online payment systems, available information about taxation, and the full tracking of electronic shipments. She also noted that these priorities also apply to analogue trade.

Other challenges faced in the development of e-commerce are the lack of proper infrastructure, particularly outside urban centres, bottlenecks in ports, roads and logistics facilities, and delivery issues due to lack of a national addressing system.

She spoke about the eTrade Readiness Assessments of UNCTAD and explained that many of the recommendations aim at strengthening or reforming national postal services to allow the delivery of goods, promoting more investment in e-commerce. Additionally, the assessments usually provide help with the design of new infrastructures and developing the private sector, notably by aggregating the demands and needs from exporters and courier services to lower transportation costs. According to Sirimanne, common recommendations also include the diffusion of innovation through the creation of observatories that enable governments to provide logistics solutions and the facilitation of cross-border trade procedures. Trade facilitation involves the streamlining of cross-border shipments of small parcels, strengthening single window systems, and laying groundwork for cross-border paperless trade.

She noted that e-commerce can be a catalyst for private sector development, but that it is a cross-sectorial effort in which all governmental and private sector actors must be brought together to address these issues. 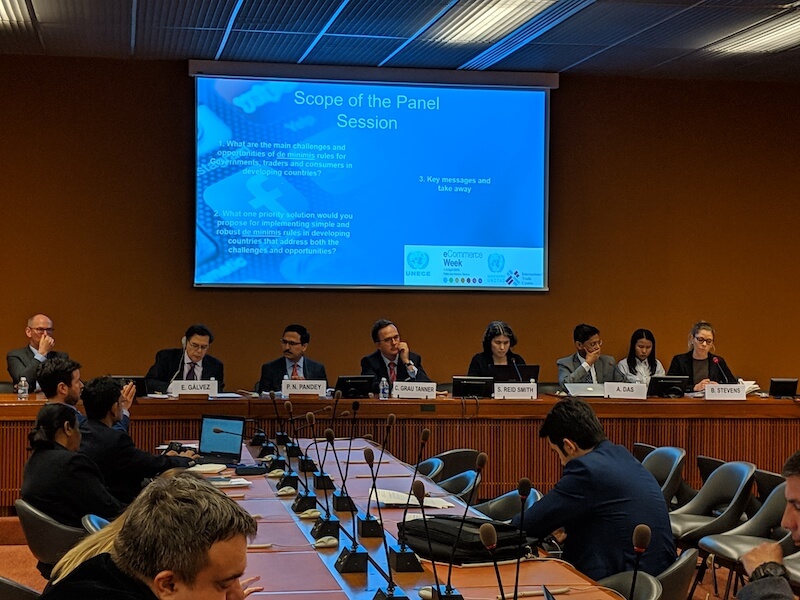 The panel was moderated by Mr E. Galvez (Permanent Representative of Chile to the WTO). He explained that the aim of the session was to identify public policy areas that could help harness e-commerce and to identify bottlenecks and trade logistic solutions that could enable digital commerce.

She spoke about the role of the EDB, which acts as policy advisor to the government, a monitor of overall performances in the export sector, a promoter of products and programs, and a facilitator as the focal point of export development and coordination with all stakeholders. Alahapperuma also mentioned the role of the EDB as knowledge provider since it offers advisory services and information regarding all aspects of the export business.

She highlighted Sri Lanka’s importance as a regional trans-shipment and commercial hub and mentioned that its domestic e-commerce market is currently estimated at around USD$ 40-70 million and is expected to grow by 3 percent in the future. Alahapperuma said that the Sri Lankan government is implementing a supportive policy framework for the digital economy under its “Vision 2025” strategy and that the country has already adopted a series of laws aimed at facilitating e-commerce.

According to the eTrade Readiness assessment undertaken with the Commonwealth, Sri Lanka has the potential for considerable growth in e-commerce, but challenges remain. It showed that online purchases are limited to only a few products and that less than half of logistic firms currently employ information and communication technology systems for management and operations.

Ms Aikanysh Saparalieva (President of the e-Commerce Association of Kyrgyzstan) explained the reasons for the low level of e-commerce in Kyrgyzstan. She first mentioned the lack of logistics infrastructure and the geographical constraints of the landlocked country, with only 35 percent of its population living in urban areas. While trying to overcome these issues by joining the WTO and Eurasian Economic Union, Kyrgyzstan is still very dependent on imports.

Saparalieva also highlighted the low level of connectivity in the country, which is at about 40 percent and the very strong digital divide between urban and rural areas. However, she pointed out that the readiness to buy online exists.

Another important impediment for e-commerce that Saparalieva identified is the lack of financial infrastructure. She noted that Kyrgyzstan is primarily cash driven and that out of about twenty-five commercial banks only four provide VISA services. Moreover, only 40 percent of the population above the age of 15 has bank accounts. According to Saparalieva, entrepreneurs thus look for other jurisdictions to conduct operations.

Additional challenges for e-commerce in Kyrgyzstan come from lacking a governmental e-commerce development strategy and the lack of data about e-commerce and its market penetration rate. Additionally, a lack of digitally skilled workers and lack of knowledge about international markets, in addition to the online language barrier, make the development of e-commerce very challenging.

Mr Nicolas Buhmann (Commercial Manager, TradeLens project, Maersk) introduced Tradelens, a supply chain platform for the shipping industry. He noted that direct cross-border buys without intermediaries are increasing and that the idea of the platform is thus to increase the security and trust in the value chain through the creation of a shipping information pipeline.

Buhmann explained that they traced the journey of a shipment container from where it was loaded to its destination point and discovered that the journey involved 30 actors, more than 100 people, and over 200 information exchanges. He noted that this shows that in some cases the administrative costs of a shipment are much higher than the product value. However, given that reducing shipping costs is an important enabler for e-commerce platforms, such as TradeLens, the platform could alleviate a highly inefficient ecosystem that is also burdened by paper-based processes.

Ms Sue Probert (Chair of the United Nations Centre for Trade Facilitation and Electronic Business (UN/CEFACT)) mentioned the definition of e-commerce followed by UN/CEFACT, which stipulates that every transaction that is initiated online is to be considered e-commerce.

She noted that once a purchase is completed online, the logistics behind it are not much different than in traditional trade and that moving of goods is already subject to international norms and conventions. She explained that UN/CEFACT is working on alleviating burdens for e-trade and e-business and highlighted the importance of e-trade as primarily B2B driven.

Probert noted that the objectives of UN/CEFACT revolve around the creation of simple, transparent, and effective processes for global business as well as efficient and automated exchanges of information. CEFACT produces the Global Trade Facilitation and Electronic Business Recommendations and Standards and works through strong public-private partnerships.

Session 2: Promoting reforms to ensure developing countries harness the benefits of e-commerce: zooming in on the role ‘de minimis’ regimes

Mr Pashupati N. Pandey (Technical Officer, World Customs Organization (WCO)) explained the challenges of the expedition of parcels and application of duties without burdening the verification processes of individual shipments. He noted that tremendous tax revenue losses for developing countries could occur by raising de minimis provisions, which could also affect domestic industries. He recognised that e-commerce is beneficial for overall trade, but mentioned the importance of finding solutions for the application of de minimis rules without destabilising local industries.

Pandey explained that the resource requirements to control de minimis are high, but necessary for the economies of certain countries. Therefore, he argued that there cannot be a standardised way to handle these regulations.

Pandey also spoke about the work of the WCO on cross-border standards, which take into consideration what could define good de minimis practices. The findings show that de minimis is a facilitation tool, but that government must also look at simplified and alternative tax revenues. Additionally, net economic impact and cost of interventions must be assessed to determine the possibility of lowering or raising de minimis. Finally, Pandey emphasised the importance of establishing de minimis in a fair and transparent way.

Mr Abhijit Das (Head, Centre for WTO Studies, Indian Institute of Foreign Trade) highlighted the importance of customs revenues for governments and noted that raising de minimis might help with the increasing volume of parcel delivery, but that it might have severe consequences for governmental revenues.

Das pointed out that raising de minimis can hurt producers in the importing country and warned that countries might lose more revenues than could be gained through higher de minimis values. Additionally, Das mentioned that boundaries and negotiating rates have already been negotiated at the WTO and other organisations and that these benefits must be weighed against potential gains obtained through de minimis.

Das argued against a possible harmonisation of de minimis and pointed out that each country should determine its own de minimis levels. He further noted the necessity of implementing procedures to avoid the circumvention of de minimis rules through the breakdown of goods into smaller, less valuable packages. According to Das, another solution to the challenges presented by de minimis regulation would be the greater automation of customs processes.

Mr Carlos Grau Tanner (CEO, Global Express Association (GEA)) mentioned the research done by GEA according to which many governments do not weigh the costs of duty collection against the costs of raising de minimis. According to Grau Tanner, governments should thus look for better ways to collect custom duties.

Grau Tanner highlighted the report of the Australian Productivity Commission, which includes a detailed report about the issues related to de minimis. In line with the findings of the report, Grau Tanner invited governments to view the de minimis issue in a more holistic way in order to make sure that the de minimis regulations balance out revenue losses of other sectors. Rather, de minimis should be looked as one element of the broader trade facilitation discussions. He noted that the Trade Facilitation Agreement (TFA) provides great opportunities for trade developments that should be implemented boldly. Noting the 73 percent growth of parcels across borders, he noted the need for automation and simplification in custom processes.

Ms B. Stevens (Trade Advisor, Trade and Investment Facilitation, Commonwealth Small States Office) noted that de minimis is very multi-layered and not only an issue of lowering or increasing thresholds. She further mentioned that many countries already face challenges in many aspects of e-commerce and that the question therefore must be how much these countries would actually benefit from the different de minimis regulations.

She also emphasised the difficulty of harmonising de minimis regulations given that the impacts are very different for each country. She called for better impact assessments of de minimis in small markets and introduced the idea of regional arrangements as the best suited policy labs. She also pointed out that the practice of splitting shipments (saucissonage) might be enhanced as a result of de minimis and that it would have a disproportionate impact on developing countries. She pointed to the use of the TFA as a starting point that could be adapted to the realities of digital trade given that the TFA would already cover most cross-border aspects.

Ms Reid Smith (Third World Network) mentioned that the United States has proposed to raise de minimis at the WTO to USD$ 800 for all countries and noted that this would be very difficult for many countries to implement. She explained that customs are usually the easiest tax to collect and that developing countries would miss out on revenues of up to 30 percent. Additionally, Smith noted that lower governmental revenues could have severe societal effects since public spending would be reduced. Moreover, health-endangering products such as alcohol and tobacco could be imported more easily, which could have consequences on public health.

Smith also mentioned that alleviated custom processes must be discussed with developing countries in order to account for the often-reduced capacities and infrastructures that would be required for automated border controls.

Finally, Smith noted that higher de minimis rates should not overlook the fact that custom security controls would still be needed and that simply raising the de minimis would not eliminate all costs of custom controls.

eCommerce Week 2019: From Digitalization to Development