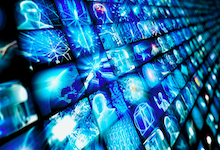 The European Broadcasting Union (EBU) will host the 20th edition of its FORECAST seminar on 23–24 November 2017, in Geneva, Switzerland.

Topics to be covered during FORECAST 2017 include: