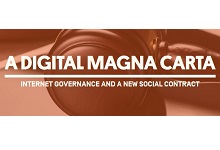 [Update] A digital magna carta between two doors: read Dr Jovan Kurbalija's reflections in a blog post first published in the Huffington Post on 4 April.
[Update] The event was livestreamed; watch the recording from the event. Livestream was provided by the Internet Society New York chapter.

On the heels of the Congressional decision on net neutrality, the discussion around Internet governance is moving into a decisive phase. It's clear that modern society should address some fundamental questions on the future development of technology and its impact of society, but many issues remain open and unresolved.

Many have suggested the adoption of a new 'digital social contract', with Tim Berners-Lee calling for a Digital Magna Carta. How can the globalisation of ICANN be achieved? Can we strike the delicate balance between ongoing innovation for the Internet and the public interests of security?

Diplo director and GIP head Dr Jovan Kurbalija is one of the main speakers. Other speakers include Constance Bommelaer, Senior Director for Global Policy Partnerships at the Internet Society; Olivier Sylvain, Associate Professor of Law, Fordham University; George Sadowsky, member of the Internet Governance Forum series, and member of ICANN's Board of Directors, the Internet Corporation for Assigned Names and Numbers (ICANN); and Stefaan Verhulst, co-founder and Chief Research and Development Officer of the Governance Lab.

As Geneva, Switzerland is becoming a global hub for Internet governance, the event will also include the participation of the Consulate General of Switzerland for a discussion on the future of the Internet in an increasingly connected, globalised world.

Follow the discussion on Twitter via #NANYC and @GenevaGIP. More details are available on the New America event webpage.