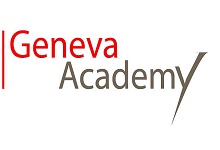 The Geneva Academy is pleased to invite you to a presentation on the regulation of cyberwarfare under international lawby Dr Marco Roscini from London’s Westminster University, based on his book, Cyber Operations and the Use of Force in International Law, published by Oxford University Press, 2014.

The internet has changed the rules of many industries, and war is no exception. But can a computer virus be classed as an act of war? Does a Denial of Service attack count as an armed attack? And does a state have a right to self-defence when cyber attacked? With the range and sophistication of cyber-attacks against states showing a dramatic increase in recent times, this book investigates the traditional concepts of 'use of force', 'armed attack', and 'armed conflict' and asks whether existing laws created for analogue technologies can be applied to new digital developments.