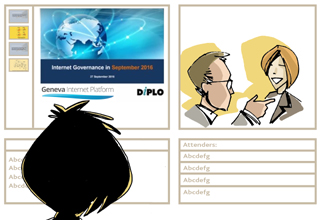 [Update] Download our latest resources: The recording and digest of January's briefing | IG Barometer for January | Issue 17 of the Geneva Digital Watch newsletter | Top Digital Policy Developments in 2016: A Year in Review, which sums up the digital policy developments for 2016 | Dr Jovan Kurbalija's forecast for 2017, Digital Politics in 2017: Unsettled Weather, Stormy at Times, with Sunny Spells, which analyses the general backdrop for digital policy in 2017, and makes predictions on the ten main digital policy developments for 2017. Join us again for the next briefing, on 28 February 2017. Registrations are now open.

The Internet governance in January 2017 briefing takes place on Tuesday, 31st January, at 12:00 UTC (13:00 CET). Join us online, or in Geneva, or from any of the hubs; fill in the registration form to reserve your place. Registration is now closed.