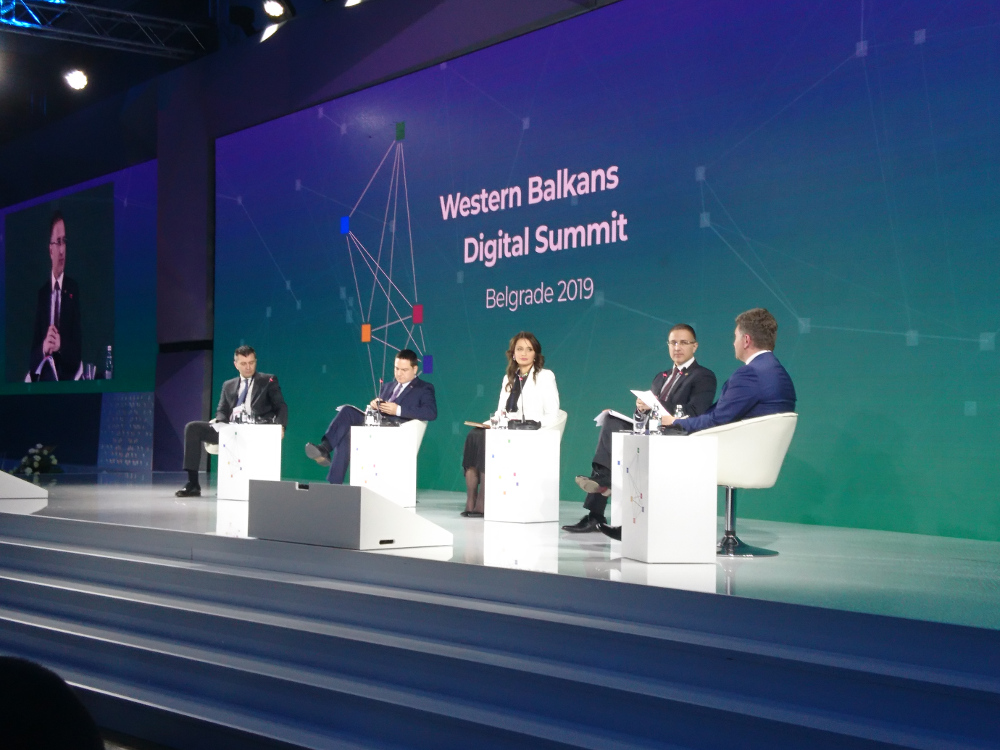 As an introduction, a movie was played about the new e-judicial system which allows the automated exchange of documents among institutions, overview and transparency of cases, alerts on cases that are taking too long, and video-hearings. Ms Nela Kuburovic (Minister of Justice, Government of the Republic of Serbia) explained that the system reduces the number of documents exchanged, simplifies the access to services to citizens, cuts costs and reduces the number of days citizens have wasted. While some public bodies still object using the system, she expressed hope that all institutions will soon become part of it.

Mr Mihajlo Jovanovic (Director of the Office for Information Technologies and eGovernment, Government of the Republic of Serbia) a moderator of the panel, underlined the importance of the unique personal identification number (JMBG) for using public services. Mr Nebojsa Stefanovic (Deputy Prime Minister and the Minister of Interior of the Government of the Republic of Serbia) informed that applying for ID documents and driving licences can be done online, while over 50% of vehicle licenses are already obtained directly through technical vehicle inspection in car services.

Jovanovic added that the Co-ordination Council for e-Government has been established to involve all the relevant institutions. Mr Branko Ruzic (Minister of Public Administration and Local Self-Government) updated that major documents and databases are digitalised, such as registers and state paper records. More importantly, the legal framework has also been updated to allow e-services, in particular the law on e-government and bylaws and the Law on General Administrative Procedure. In addition, the National Academy of Public Administration has been established, also to help public servants work with technologies. The number of e-services is now running, such as ‘e-Inspector’ which connects all inspections across the institutions, and ‘e-Enrolment’ for online school enrolments.

Jovanovic stressed that Office he leads managed to set up the key infrastructure for e-services. A particular challenge in Serbia related to the collection and digitalisation of citizens’ data – which had, due to historic reasons, been scattered around ministries, local governance and other institutions – was resolved. Mr Zoran Djordjevic (Minister of Labour, Employment, Veteran and Social Affairs) added that the e-Inspector application, established with the support of Norway, helps combating the grey economy, enabling labour inspectors to access various registers, cooperate with other inspection services, and better archive reports in unified formats and databases. This will, he hopes, reduce number of fatal work injuries at construction sites that fail to apply proper protection standards.

Jovanovic revealed that Serbian receipt for success in e-government is in establishing a ’one- stop-shop’, a single place to resolve administrative issues, while institutions automatically exchange documents. Kuburovic explained that public notaries play the key role of the one-stop-shop, and used the e-Cadastre service for real-estate transfers as an example where not only the administrative burden on citizens is reduced, but it also disallows mistakes in transaction ledgers, increases the safety of users, and ensures that taxes are recorded well.

Minister Ruzic added that local governments have also been encouraged and empowered to use ICT and set-up one-stop-shops, giving the example of e-Registry service in the town of Novi Pazar. In addition, support centres to help users learn how to use new services have been established.

Jovanovic informed that state data centre has been established, with 20 institutions already placing the data. A new major data centre will be built in the town of Kragujevac, which will be five times bigger than the current one.

Minister Djordjevic added that the pension fund and the National Employment Service are also soon expected to connect to the data centre soon. Of particular importance is creating social cards , by firstly collecting data related to the social status of citizens by the Ministry, then enacting the law, connecting with the data of other institutions, and finally developing tools for using these data (based on the system used in Denmark) – all hopefully up and running by 2021. Social support could thus automatically be calculated and provided for those in need, while additional services can be embedded such as assisting persons with disabilities to automatically locate parking lots, and parents of newborn babies to instantly receive parental allowance. In addition, a document management system was set up to identify and analyse business processes within the Ministry and services.

Minister Stefanovic presented project ’Safe Society’ which introduces high standards for cross-regional passing, in accordance with the Schengen standards, while the project ’Safe City’ introduces connected cameras around cities, equipped with the face and pattern recognition software, and connected to citizens databases. Such a surveillance system can enable automatic alerts on intrusions to certain objects, objects left unattended, and gatherings of groups of people, and help police officers quickly identify plates of suspicious vehicles and identities of suspects, and even monitor the movement of suspicious vehicles and persons around the city or the country. In addition, the advanced video communication system was presented that will enable better communication among police officers. With regards to security of data, he reminded that databases in the Ministry of Interior, which host sensitive data about ID documents, have not been leaked or breached due to high-security measures implemented. The communication among cameras, databases and officers will be enabled by the separate LTE system set-up exclusively for that purpose by the Ministry, while the cryptographic protection of data will be developed and implemented by the Ministry itself, which will limit possibilities for hackers to intrude.

Minister Kuburovic announced e-Auctions platform that will make public auctions more transparent, e-InfoBoards to inform citizens about cases, and e-Court which will enable the entire process to be conducted online. Minister Ruzic informed that Serbia will continuously work on improvements and that it is a member of the European working groups on introducing artificial intelligence solutions to the public service. Minister Djordjevic assessed that Serbia is catching up with the leading countries with e-services offer. Minister Stefanovic concluded that the Ministry of Interior is already looking at 4K resolution solutions and 5G networks at some point, and is continuously improving.