The final report of the High-Level Panel on Digital Cooperation (HLPDC) represents an important starting point for fostering digital co-operation through a multistakeholder approach that tackles gaps in existing international frameworks.

Since the publication of the report, incomparable multistakeholder consultations have been held to foster digital co-operation, as highlighted by Dr Daniela Brönstrup (Deputy Director-General for Digital Policy, Postal Policy, International Affairs, and Media, Federal Ministry for Economic Affairs and Energy, Germany) who further underlined Germany’s support of multistakeholderism and the work done by the HLPDC. The country has indeed been commissioned by the United Nations to co-ordinate, in partnership with the United Arab Emirates, the implementation process resulting from the fifth set of recommendations of the final report. In this regard, representatives from France and the United Kingdom asked for more information on the appointment of the champions.

The session represented a space for discussion, comments, and feedback from different stakeholder groups, in addition to the online consultation processes held by the HLPDC and EuroDIG.

As highlighted in the report and stressed by Mr Fabrizio Hochschild (Assistant Secretary-General for Strategic Co-ordination in the Executive Office of the Secretary-General and Special Adviser on the Preparations for the Commemoration of the Seventy-Fifth Anniversary), co-operation is essential for enjoying the benefits of digital technologies and its digital manifestations. While 3.6 billion people do not yet have access to the Internet, there are undeniable challenges regarding security measures for personal data privacy, freedom of expression, data ownership, and social cohesion. These challenges are addressed through national and regional normative and policy approaches, but the nature of these technologies overcomes borders. This raises challenges related to the risk of fragmentation and the incompatibility of legislative norms. As stressed by Hochschild, the risk of fragmentation of the Internet into two blocks, one led by the USA and the other by China, needs to be addressed. He further argued that ‘a fractured Internet is a serious threat to an open, free, safe, and just Internet that was envisioned by its founding father’. 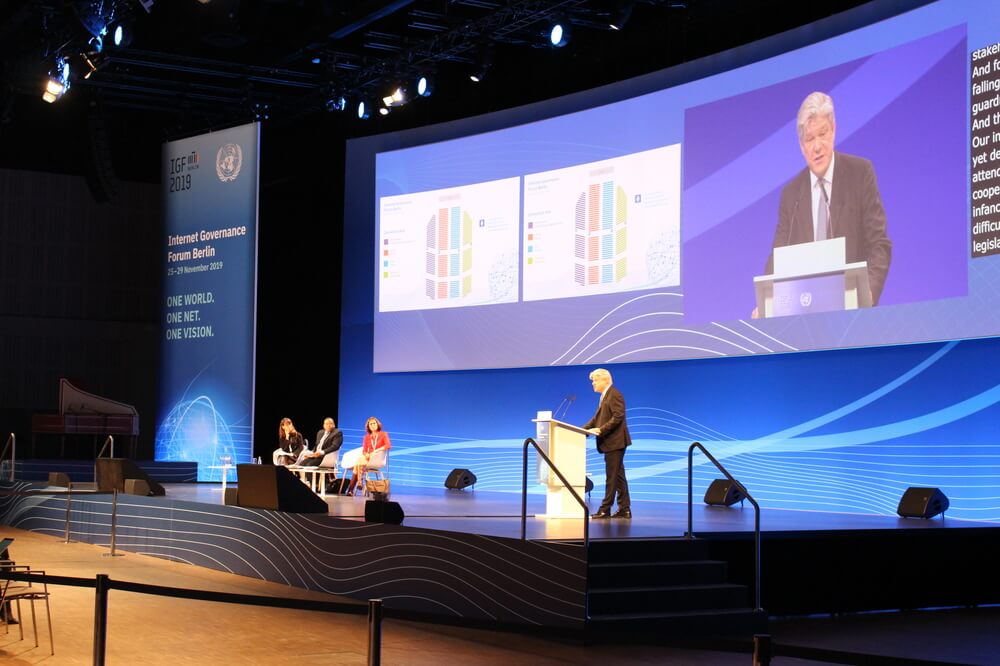 A similar fragmentation is emerging with the different legislative approaches advanced by Europe, the United States, and China. The dangers of incompatible and fragmented digital regulations would undermine the free, secure, and global nature of the Internet.

Digital co-operation raises the question of consensus and how it can be achieved in a holistic and inclusive way to include different stakeholders and least represented voices, including but not limited to, women and the Global South. While a strong need for consensus across borders and stakeholder groups is needed, scepticism hampers the development of international legal frameworks due to the fear of undermining the libertarian free-market and Internet ethics, as well as the risk of regulation intrusions by international politics. However, as stressed by Hochschild, and as emerged in EuroDIG’s online consultations, existing international mechanisms are not effectively developed nor sophisticated enough to face current challenges.

Recommendations 5A and 5B of the HLPDC report stress that the Secretary-General should facilitate an agile consultation process for providing updated mechanisms for global digital co-operation, and ‘to apply shared values, principles, understandings and objectives for improved global digital co-operation architecture’. In order to achieve this goal, the report proposes the establishment of a tech envoy. Digital co-operation in the context of international co-operation needs to be further strengthened. In this regard, the 75th anniversary of the United Nations will represent an opportunity to combine efforts for achieving a free, safe, and secure Internet.

Three options were set out in the HLPDC report for improving the existing global digital co-operation: the Internet Governance Forum Plus (IGF Plus), a distributed co-governance architecture, and a digital comment operator. IGF Plus enhances multistakeholderism by proposing an architecture with an advisory group, a co-operation accelerator, a policy incubator, an observatory, and a help desk for more effective policy support. The distributed co-governance architecture would build on existing mechanisms and rely on a self-forming horizontal distributed network approach used by the Internet Engineering Task Force (IETF), the Internet Corporation for Assigned Names and Numbers (ICANN), the World Wide Web Consortium (W3C), the Institute of Electrical and Electronics Engineers (IEEE), and others to host networks and design norms and policies. In other words, a completely distributed form. Such an approach proposes a comment approach with loose participation of the UN. Indeed, it draws similarities to the global commons and governs through ongoing dialogue within a global normative framework.

During the session, many contributions and feedbacks were advanced by different stakeholders, especially in regard to IGF Plus. Despite having three different options, comments highlighted that they are not mutually exclusive. Indeed, while in 2005 the IGF was the centrepiece of the digital ecosystem, the status quo is so rapidly evolving that it requires an approach in which IGF Plus represents a fundamental and not a central piece of the entire ecosystem.

Strong support to IGF Plus was advanced by Mr Thomas Schneider (Consul General of Switzerland). He stated that IGF Plus unblocks some of the disagreements regarding the future of the governance architecture and highlights the gaps of the current architecture. As Schneider pointed out, it is important to understand to what extent there is agreement on gaps such as inclusiveness of the process and disconnect between expert dialogues.

In order to be effective, digital co-operation needs to identify objectives that would be achieved on two levels. As Mr Juan Fernández (Senior Advisor, Ministry of Informatics and Communications, Cuba) highlighted, the first and highest level is the political one, on which all parties must agree upon. The second should be a more particular and technical level.

The online consultations conducted by EuroDIG also highlighted some gaps, especially in regard to references and engagement on climate issues, the role of media, and inclusiveness. As underlined by Mr Raquel Gato (Senior Policy Manager, Internet Society (ISOC)), digital co-operation mechanisms need to be holistic, multidisciplinary, multistakeholder, agile, and able to translate rhetoric into practice.

Another crucial aspect that was stressed during the discussion relates to the financial support to the IGF and its secretariat, as pointed out by Denmark and supported by other representatives. In this regard, Brönstrup announced that Germany will invest US$1 million in supporting the IGF.

Another aspect that emerged in the discussion was the boast of bodies with decision-making capacities regarding the Internet. As stressed by Mr Wolfgang Kleinwächter (Commissioner, Global Commission on the Stability of Cyberspace (GCSC)), there are nearly one dozen governmental bodies with decision-making capacities regarding Internet issues. Thus, a co-operation accelerator should be introduced for better linkage between the discussion platform happening at the IGF and the decision-making platforms in various intergovernmental bodies. Switzerland stressed the need for further co-ordination that would lead to strong reactions such as with the Paris Call for Trust and Security in Cyberspace and the Christchurch Call. As Mr Jorge Cancio (Federal Office of Communications, Switzerland) explained, there is a need for more co-ordination, better policy networks, as well as strong observatory and help desk functions. Cancio presented Switzerland as a leading example, since in 2014 it established the Geneva Internet Platform which aims, through an observatory and a support network, to provide tools for diplomats worldwide.

Finally, references to the UN Secretary-General strategy on new technologies has been highlighted by a representative from the United Kingdom as a means for fostering the UN as a ‘trusted venue for all stakeholders to come together in an open and transparent way to discuss technology issues’. Following this line, the UN HLPDC could be part of similar examples and efforts.