During the IGF 2018 recap session in Paris, it was noted that voices from the Middle East and North Africa (MENA) were under-represented in the global debate. This session aimed to bring together various actors in the region to discuss ways for better engagement of stakeholders in the region, to present challenges the faced and current initiatives, and to share experience and best practices.

The round-table discussion confirmed that the MENA region is unique not only in the global context, but also country by country, as they face different challenges. This requires a tailored approach in addressing subject matters and in developing capacity building. Mr Chafic Chaya (Regional Communication Manager for Middle East, RIPE NCC) pointed out that many cultural differences exist compared to Europe, and that there is a need for a neutral approach in capacity building. Mr Manal Ismail (Chair, ICANN Governmental Advisory Committee) pointed out that certain concerns, such as gTLD domain names, are common to the whole region.

One of the challenges identified was a lack of skills in using the Internet. As Ms Susan Teltscher (Head, ITU-D Capacity Development Division, ITU) confirmed, the technical prerequisites to the use of the Internet are available; however, people lack the ability to use it meaningfully. Ismail pointed out that sometimes, people are unaware of how the Internet is set up and functions, and confuse its operation with policy regulations.

The language barrier was addressed as another challenge for meaningful engagement with the Internet and capacity building exercises. Ismail reflected on the prevalence of the English language in resources, on the complexity of Internet governance topics, and on efforts to provide translations, transcriptions, and materials with which the participants could engage. Ms Mary Uduma (Coordinator, Nigeria IGF), a member of the audience, confirmed that a lack of access to information in languages other than English creates a barrier to Internet use. 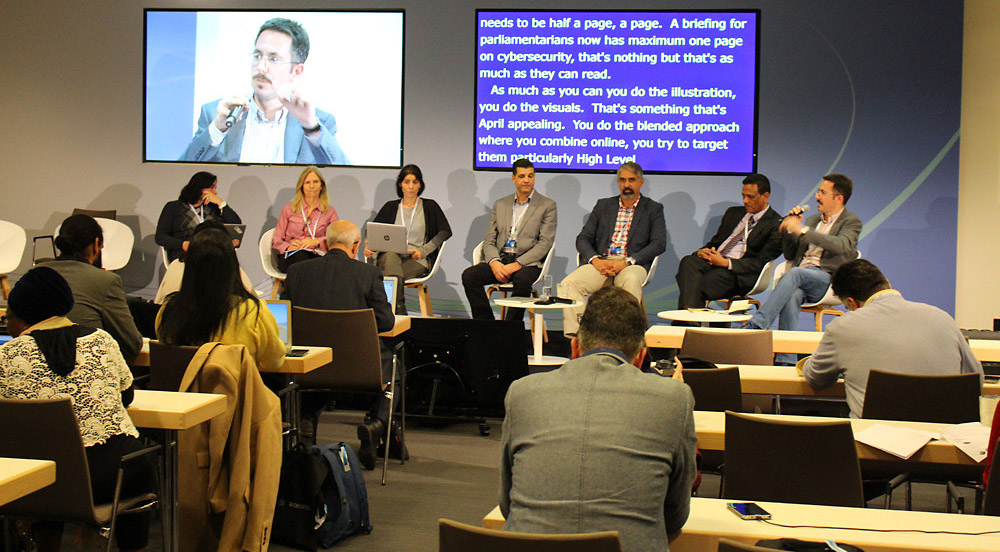 With regard to capacity building, the panel identified several areas requiring improvement. Mr Vladimir Radunovic (Director of e-Diplomacy and Cybersecurity Programmes, DiploFoundation) mentioned that capacity building should be viewed as a process, and not just as separate instances of training. Participants agreed that the engagement of all stakeholders and vertical integration within institutions is crucial for enhanced capacity building. Chaya also pointed out issues with retaining highly skilled professionals in the region.

Sustainability and the scaling of capacity development was explained by Mr Adil Sulieman (Senior Policy Officer, African Union Commission) who used the example of PRIDA, an initiative whose aim is to increase active participation of African Union members in the global debate. He pointed out that engagement at both local and regional levels is vital to the creation of an environment. Helping regional development by training people to train others, multiplies the scope of capacity building.

In the second segment, participants of the panel presented current initiatives and challenges of their work in the MENA region.

Presenting current initiatives in the MENA region, Ms Jane Coffin (Senior Director to the CEO, Internet Society) introduced two reports describing projects that the Internet Society (ISOC) is currently working on related to IXPs and to environmental and infrastructure security in the region. ISOC is working with governments in the MENA region on the development of IXP points, localised Internet development, and provision of secure content. The effort also includes building up infrastructure. These are collaborative efforts across all stakeholder groups, including ITU and UNCTAD, for example. Coffin pointed out that working on sustainable and scalable solutions to access the Internet, such as provision of community networks at the local level, respect for local concerns, and collaboration – not competition – between the organisations are of utmost importance. She also stressed the benefits of the ISOC’s arrival as a neutral, technical, equal partner into the region.

In explaining the involvement and work of UNESCO, Mr Sasha Rubel (Programme Specialist, Knowledge Societies Division, UNESCO) introduced the Internet Universality Framework and principles guiding its work: a rights-based approach within an open, accessible, and multistakeholder setting. The Internet Universality Indicators (ICIs) are an assessment tool that UNESCO developed for a comprehensive and substantive understanding of national Internet environments and policies. It analyses gaps in the Internet environment in order to assess the alignment of the environment and policies, and to develop recommendations and practical initiatives on a country level. The ICIs are used to develop comprehensive policy.

Mr Ayman El Sherbiny (Chief of ICT Policy Department, ESCWA) addressed digital policy initiatives in the MENA region. Speaking of the work of the new approach by the UN, specifically of the High-Level Panel on Digital Cooperation, he pointed out the need for a creative and disruptive re-invention of dialogue between stakeholders. He spoke of an Arab IGF planned for 15-16 January 2020, based on new dynamics and a new road-map for 2030. Another initiative El Sherbiny mentioned was the Arab WSIS. While not named as such, a bi-annual Arab WSIS process has taken place in partnership with the ITU and UNESCO during 2017 and 2019, with current efforts to make it sustainable. He also mentioned the Arab Digital Development Report to be published, relating digital development in the region with sustainable development goals (SDGs).

Presenting her experience in Lebanon, Ms Zeina Bou Harb (Co-convener, IGF Lebanon) talked about the operation of OGERO, the Lebanese telecom company, and its involvement in a multistakeholder community for the Lebanon IGF, based on regional and global expertise. The telecom company, OGERO, has aligned its business strategies with SDGs, serving as an example for creating synergies to overcome challenges in the MENA region.

Participants of the panel discussed the challenges faced in engaging in Internet governance issues in the MENA region. Rubel clarified that many states do not have centres for data collection, making it difficult to access and analyse data. El Sherbiny expressed the need for practical steps in policy making and for agility to show results, as well as for the possibility to scale up efforts. Mr Qusai Al Shatti (Former Co-Chair of Arab IGF Review Team) addressed the challenges in convincing governments in the MENA region to adopt topic-specific digital policies and in creating a participatory environment. Mr Tijani Ben Jemaa (MAG Vice-Chair, North Africa IGF) stated that the main challenge is the lack of participation, especially the lack of diverse and quality participation on the regional level. Mr Nadira Al-Araj (Member of ICANN NomCom) talked about the lack of a nurturing and open environment that might encourage participants, yet emphasised the need to be inclusive and not adopt a top-down setting.