Key issues in digital policy – including cybersecurity, trust in the Internet ecosystem, the involvement of stakeholders, and digital divide – were reiterated during the High Level Leaders Meeting, on 9 November 2015. The welcoming remarks by several Internet governance leaders set the scene for IGF discussions over the next few days.

The following is a round-up of the comments made by the speakers.

Brazilian Communications Minister Andre Figueiredo believes that a number of challenges lie ahead. These include understanding the role of governments; another related to the IANA transition, which the Minister believes should be concluded soon.

Recalling the IGF meeting held in Rio de Janeiro, and referring to various digital policy discussions held in the past few weeks, Celso Pansera, Brazilian Minister of Science, Technology and Innovation, emphasised the need for governance of the Internet. Access to hardware and software was important, yet the participation of the main players in the governance of the Internet was equally important. The development of Marco Civil was one of the best examples of collaboration.

Virgilio Almeida, Coordinator of the Brazilian Internet Steering Committee, lauded the IGF’s many achievements, including the recognition of the multistakeholder model since the Tunis summit, the broadening of IGF discussions, and the fact that the IGF was held in less central locations. However, he saidwe need to ask a few questions, such as: what should we do to make the Internet more effective in reducing inequality (social, economic, gender etc)? Access is essential but is not enough. Connecting people to networks is important but is equally insufficient. He said we do not have an answer yet as to what we can do, but we do know that the Internet of the future needs to make a difference for our future.

Also referring to the SDGs, Janis Karklins, Chair of the Multistakeholder Advisory Group, said that we are faced with many complex issues. At the same time, these issues were topics which we never thought would affect us.

He also referred to the continuation of the IGF, which is this year taking place at a crucial time in view of the WSIS+10 review process and the high-level meeting in December that will decide on the IGF’s mandate.

Lana Nusseibeh, Permanent Representative of the United Arab Emirates to the United Nations in New York, in her capacity as co-facilitator of the Intergovernmental negotiations on the Review of the Implementation of the WSIS outcomes, rounded up the developments of the WSIS+10 process so far, and the contributions to the document.

Negotiations on the outcome document are underway, and among the elements that were reiterated where those related to ICT4D, the role of the Internet in the 2030 agenda, affirmations about the multistakeholder model, and support for the continuation of the IGF. On the other hand, there was continued divergence on other elements, including enhanced cooperation and net neutrality.

Malcolm Johnson, Deputy Secretary-General at the International Telecommunication Union (ITU), said that people need to have secure and equitable access to the Internet. The ITU, which initiated the WSIS process in 1998, plays a key role in facilitating the development of infrastructure.

With regards to the Tunis Agenda, Mr Johnson said that this was unanimously endorsed in 2005, and should now guide our post-2015 discussions. While the first decade of the process was marked by intense discussions on principles entrenched in the agenda, such as principles of governance, there are now significant opportunities and challenges.

Hasanul Haq Inu, Minister of Information of the People’s Republic of Bangladesh, expressed concern over the Internet, which he compared to a glass house that was compromised by cybercriminals. He encouraged stakeholders of the IGF to take the lead in helping to make the Internet secure.

The Minister also referred to a post-2015 roadmap which the community needed to undertake. The proposed roadmap would include key issues, such as a definition of multistaholderism, reference to standards to ensure the reliability of technology, building the capacity of policy-makers, and promoting ICT literacy. He said the Internet is a global common; we should place people before power and politics.

In referring to the threats of the Internet, we also need to tackle the threats to the Internet. NIC.br chairman Demi Getschko said. This does not mean that we should not protect ourselves, but that it was also crucial to protect the Internet.

Today, we are contemplating balloons and drones, Google Chief Evangelist Vint Cerf said. We have seen a significant evolution, from undersea cables connecting continents, to the applications of the World Wide Web.

Emphasising collaboration among stakeholders and countries, Yasuo Sakamoto, Vice-Minister for Policy Coordination (International Affairs) at the Ministry of Internal Affairs and Communications of Japan, said that his country was committed to promoting international activities such as the IGF, especially in the face of so many new and complex issues. In addressing these issues, it was important for stakeholders to address these in a multistakeholder setting.

Nnenna Nwakanma from the World Wide Web Foundation made an interesting analogy with lollipops – the edible sweet which she has fond memories of as a child. E-commerce, e-learning, and other opportunities represent the sugary core, whereas at the heart, the Internet is built around people. Emphasising the need to put people before power and politics, she called for safeguarding offline rights online.

Yet, another crucial issue which we will see beyond 2015 is the interpretation and application of the right to privacy and data protection, Jeanette Hofmann, researcher at the Social Science Research Centre Berlin (WZB), said with reference to the recent Court of Justice of the European Union rulings. The judgments have placed extraterritoriality and the role of privacy entities into focus.

She also made reference to the need for a universal law that addressed state surveillance and the Internet business model – a need expressed by new UN Special Rapporteur on the Right to Privacy Joseph Cannataci.

Reiterating that access issues should be high on the agenda, Hlengiwe Buhle Mkhize, South African Deputy Minister of Telecommunications and Postal Services, said that the present debate on the role of governments tends to ignore the outcomes of the Tunis Agenda, which clearly outlined such roles. The role of government is to address public policy, yet partnerships with other stakeholders is key as governments cannot carry out the work on their own.

Ghanaian Communications Vice-Minister Ato Sarpong referred to the significant strides in Ghana in various areas related to technology, ICTs and the Internet. He called on stakeholders to place consumers at the centre of discussions. We should have a safe secure and affordable internet at the centre of discussions. Cybersecurity and child online protection were also of particular concern.

Steve Crocker, Chair of ICANN’s Board of Directors, said that there were many issues in Internet governance, with many more to come, and many which were not yet solved. He foresees the creation of more organisations with particular mandates – of which ICANN was an example – which is likely to lead to an ecosystem of such organisations.

Ilham Habibe, chair of ICC BASIS, said that the attainment of the 17 SDGs lied on ICTs. Business engagement with other stakeholders was a prerequisite to advance the goals. We can do much more to advance to the next steps, including augmenting the voice of developing countries.

Ambassador Daniel A. Sepulveda, US Coordinator for International Communications and Information Policy within the Department of State, said that the ICTs and the Internet can be used for beneficial and detrimental purposes. Yet, the technology itself is not at fault. Rather, it was the fact that some people were misusing the tools. He called on the community to focus on making the Internet more accessible and in respecting the technology and the power of the community.

Mr Jean Paul Philippot, President of the European Broadcasting Union (EBU), insisted for a common level field for all actors, and for national and international cooperation to address the issues. The EBU already has several tools that can help solve the issues, and was ready to work with stakeholders on addressing the challenges.

Internet Society president and CEO Kathryn Brown, referred to the Internet community’s mantra of ‘rough consensus, running code’, where rough consensus at the IGF meant that stakeholders could listen, learn and agree on principles. The idea of governing is central to discussions, yet it is not the Internet that we should seek to govern, but ourselves.

The past 10 years have represented a process of collaboration and moving forward; it was time to reassert our commitment to the bottom-up process, with two imperatives: first, achieving the SDGs is contingent on facilitating access in developing countries; second, we need to make sure that users trusted the network.

Nii Quaynor, Professor of Computer Science at University of Cape-Coast, Ghana, also described Ghana’s development over the past two decades. The local policy environment was also improving thanks to the IGF and other initiatives that facilitate the adoption of international initiatives at a local level.

Francilene Procópio Garcia, Secretary of Science and Technology of the State of Paraíba, expressed the view that there are many good practices in the advancement of technology. Reiterating the support in favour of the multistakeholder model, she said that this approach enabled the multiplicity of views.

Eileen Donahoe from the Human Rights Watch referred to several trends in digital policy, both online and offline. For example, human rights activists are faced with very real security issues in the offline world; laws which are enacted under the rubric of security are often frames too broad and vague; fragmentation of policies at architectural or protocol levels often carry the potential of undermining the interoperability of the internet; the burden of responsibility in what are considered to be traditionally government roles are shifting onto digital tech companies.

In another interesting analogy, this time to a glass of water, Aimal Marjan, Deputy Minister for Information Technology of Afghanistan, said that the infrastructure enabling accessibility (or lack of it) was not the major issue for many Internet users; rather, it is the content which poses a barrier to inclusivity. He said we need to ask users: what does the Internet represent to them?

Megan Richards, Principal Adviser, Communications Networks, Content and Technology Directorate-General within the European Commission, recalled the IGF meetings held in the past 10 years, which were organised in 5 different regions. Although this was very representative, we need to further this aspect, and ensure the participation of those who can participate but do not have resources. Initiatives such as the Global Internet Policy Observatory aimed to empower people with lack of resources to participate in the process.

The private sector’s involvement was also important, as Christopher Steck from Telefonica S.A. reminded everyone. Telefonica invested heavily in the region over the past 25 years, and it was this level of investment that helped people get connected. However, he also called on governments to create the right policy framework.

Anriette Esterhuysen, Executive Director of the Association for Progressive Communications (APC), referred to the many current issues that are being debated, and suggested that we need to stop thinking that the multistakeholder and multilateral models were mutually exclusive. 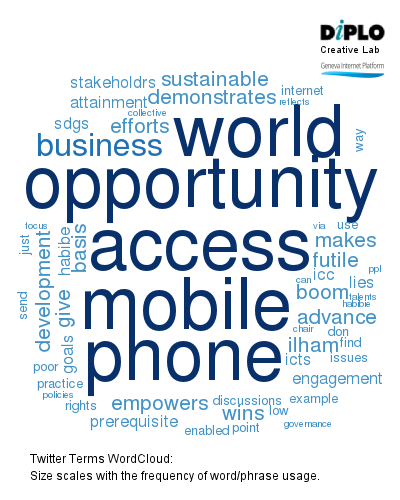 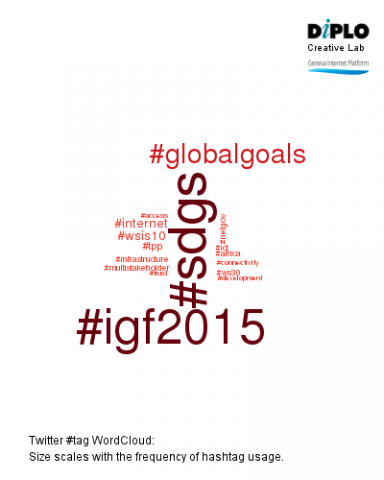 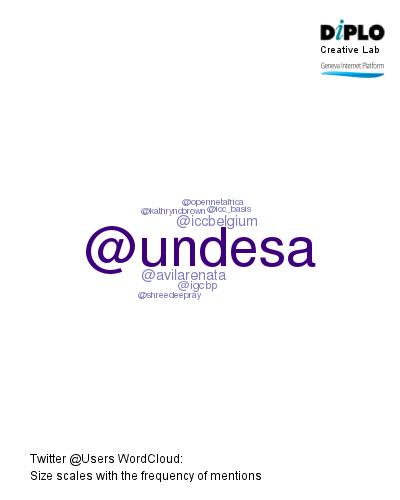