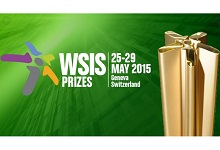 The Geneva Internet Platform needs your support! Please vote for us in the WSIS Project Prizes 2015 voting process. The Geneva Internet Platform has been nominated for a WSIS Prize under Category 1 – The role of governments and all stakeholders in the promotion of ICTs for development. Voting closes on 1 May 2015. The winning projects will be announced during a Prize Ceremony which will be held at the WSIS Forum 2015 (25-29 May 2015).

Why vote for us?

The WSIS Project Prizes recognise the efforts of stakeholders for their added value to society and their commitment towards achieving the WSIS goals.

For us, this means a vote of support in recognition of the Geneva Internet Platform's work in assisting stakeholders in finding resources, building capacity, and formulating digital policy, and in fostering engagement and cooperation among stakeholders through a neutral and inclusive space.

We therefore appreciate your taking 10-15 minutes of your time to vote.

Voting for the WSIS Prizes is open to everyone. To vote:

The GIP in detail

The GIP, an initiative of the Swiss authorities operated by Diplo, has just completed the first year of operations, and is working on new projects that aim to further assist stakeholders in the digital policy process.

The GIP’s work is aimed at players in the Information Society, including civil society, technical and academic communities, and high-level representatives of governments, with a special focus on small and developing countries. Over the span of one year, the GIP proved to be highly relevant for diplomatic, professional, academic, and other communities in Geneva and beyond, due to its concrete programmes and activities.

The GIP runs an online platform and observatory - at www.giplatform.org - which follows and gathers information and resources in one space, for stakeholders, especially those from small and developing countries, to make use of in formulating their own digital strategies.

In December, the GIC launched the Internet Governance Timeline, a visual timeline of upcoming and past Internet governance and digital policy events. In addition, regular online briefings summarising the main digital policy developments for each month, with simultaneous discussions in situ, are organised every month.

The GIP also delivers online and in situ programmes and briefings related to digital policy debates and developments from its capacity building centre.

Diplomats, academia, and members of civil society and the business and technical communities participated in a series of other events organised by the GIP (in some cases in partnership with other institutions): a workshop on diplomatic reporting in the Internet era; an event discussing the role of governments in Internet governance; participation in the Torino Symposium on the evolution of the Internet governance ecosystem and in the Geneva International Film Festival on cybersurveillance; a discussion on Bitcoin and other cryptocurrencies; a roundtable on Internet as a critical resource for Pacific Island states; a discussion on jurisdiction in the Internet era; a discussion on privacy and surveillance; a forum on transparency and human rights in the digital age; book launches of two Internet governance publications; and a discussion on cybersecurity, early this year, aimed at developing a global response to cybersecurity challenges along the lines of the Geneva Message on Strengthening Internet Governance.

In 2014, the GIP also organised the international Geneva Internet Conference which convened hundreds of stakeholders in Geneva and online via remote participation, to discuss critical issues, gaps, and future developments in Internet governance and digital politics. A preparatory process including webinars and forum discussions preceded the conference. The document Strengthening Internet Governance – the Message from the Geneva Internet Conference summed up the conference outcomes.

The GIP’s work is carried out by a dedicated team of GIP and DiploFoundation experts (including academics, diplomats, technical experts, and legal professionals), operating from different countries. The GIP’s hub is physically located in Geneva.

Your support in the WSIS Project Prizes 2015 is much appreciated.

The Geneva Internet Platform is an initiative of the Swiss authorities operated by DiploFoundation. Diplo's Internet Governance Capacity Building Programme (ICGBP) has also been nominated for a WSIS Project Prize under Category 4 – Capacity Building. Read more about this project and vote by following the same steps as above.