Welcome to all WSIS delegates 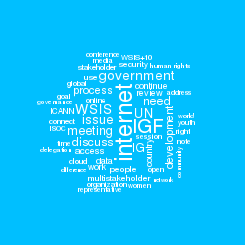 The welcome session marked the start of the two-day WSIS Review UN GA and was organised by the co-facilitators: Latvia and the United Arab Emirates. Latvia’s Minister of Education and Science Marite Seile opened the session and emphasised the developments in ICTs that have arisen since Tunis. Then, the United Arab Emirates Ambassador Lana Nusseibeh introduced the panel, as well as the core topics of WSIS: development and the digital divide, cybersecurity and human rights, and a multistakeholder approach.

Eric Schmidt, Executive Chairman of Alphabet/Google, commented on the growing influence of ICT on society, with the development of intelligent telephones as one of the most important developments of the last decade. Although  ICT ‘makes people smarter’, work needs to be done to connect the two-thirds of the world without Internet access. Günther Oettinger, the European Union Commissioner on Digital Economy & Society, explained that connecting the unconnected requires enabling environments and digital literacy. According to him, technical solutions are not sufficient, and social, ‘human’, measures are essential to bridge the digital divide.  South Africa’s Minister of Telecommunications, Siyabonga Cwele, added that Internet infrastructure also requires incentives for private sector investments. Furthermore, he considered the empowerment of women to be critical to closing the digital divide, as they are the backbone of marginalised societies.

Mitchell Baker, Mozilla’s Executive Chairwoman, reiterated the basic principles of the Internet: it must be a global public resource, open and accessible for all. This open element needs to be present in the Internet’s foundation. According to her, this also enables its users to be creative and innovative, as everyone has the possibility of building applications and generating content, which is crucial to tackling the global problems we face.

Fadi Chehadé,  CEO of ICANN, spoke about the pervasive effects of the Internet that horizontally permeate all aspects of society. As the Internet ‘does not understand borders very well’, Chehadé argued that it challenges our familiar ideas and systems of governance and makes national laws ‘worthless’. Future governance should therefore ‘look like the Internet itself’ and govern it in a collaborative, distributed, and polycentric way. Eric Schmidt agreed that national sovereignty does not work well in relation to the Internet, and he expressed his concern about the fragmentation of the Internet. ‘A failure of the multistakeholder system would be terrible’, he said.
When Nussebeih asked the panellists about the potential role of the United Nations, Cwele emphasised the UN’s potential in development assistance, while Chehadé saw its potential in facilitating multistakeholder dialogue, both nationally and internationally. Baker argued that we are faced with a larger question: what does governance look like in a connected era? The nature of a network is different and will affect the role of governments. Hereby, the incorporation of multiple voices is an opportunity that we need to capture.