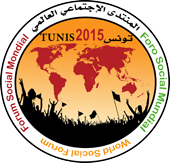 [Update] The Internet Social Forum was presented during the World Social Forum, held in Tunis, Tunisia on 24-28 March 2015, during which a call to develop the People's Internet Manifesto was made. Read the statement.

The formation of the Internet Social Forum was announced in a press release issued on 22 January 2015. The full text is further down.

View the list of participating organisations; more details about the Internet Social Forum is available on the initiative's website.

A group of civil society organisations from around the world has announced the Internet Social Forum, to bring together and articulate bottom-up perspectives on the 'Internet we want'. Taking inspiration from the World Social Forum, and its clarion call, 'Another World is possible', the group seeks to draw urgent attention to the increasing centralization of the Internet for extraction of monopoly rents and for socio-political control, asserting that 'Another Internet is possible'!

The Internet Social Forum will inter alia offer an alternative to the recently-launched World Economic Forum's 'Net Mundial Initiative' on global Internet governance. While the World Economic Forum (WEF) and the 'Net Mundial Initiative' convene global elites, the Internet Social Forum will be a participatory and bottom-up space for all those who believe that the global Internet must evolve in the public interest; a direct parallel to the launch of the World Social Forum in 2001 as a counter initiative
to the WEF.

“While the world's biggest companies have every right to debate the future of the Internet, we are concerned that their perspectives should not drown out those of ordinary people who have no access to the privileged terrain WEF occupies – in the end it is this wider public interest that must be paramount in governing the Internet. We are organising the Internet Social Forum to make sure their voices can't be ignored in the corridors of power,” said Norbert Bollow, Co-Convenor of the Just Net Coalition, which is one of the groups involved in the initiative.

The Internet Social Forum, and its preparatory process, is intended as a space to vision and build the 'Internet we want'. It will be underpinned by values of democracy, human rights and social justice. It will stand for participatory policy making and promote community media. It will seek an Internet that is truly decentralized in its architecture and based on people's full rights to data, information, knowledge and other 'commons' that the Internet has enabled the world community to generate and share.

Somewhat similar to Web inventor Tim Berners-Lee’s call for a ‘Magna Carta for the Internet', the Internet Social Forum proposes to develop a People's Internet Manifesto, through a bottom-up process involving all concerned social groups and movements, in different areas, from techies and ICT-for-development actors to media reform groups, democracy movements and social justice activists.

This year will also see the 10 year high-level review of the World Summit on the Information Society (WSIS), to be held in New York in December. As a full-scale review of a major UN summit, this will be a critical global political event. Since the WSIS, held in 2003 and 2005, the Internet, and what it means socially, has undergone a paradigm shift. The WSIS witnessed active engagement of civil society and technical groups as well as of business. However, currently, there seems to be an deliberate attempt to sideline this UN-led initiative on governance issues of the information society and Internet in favour of private, big-business-dominated initiatives like the WEF's Net Mundial Initiative. The Internet Social Forum, while remaining primarily a people's forum, will also seek to channel global civil society's engagement towards the WSIS +10 review.

The following organisations form the initial group that is proposing the Internet Social Forum, and many more are expected to join in the immediate future. This is an open call to progressive groups from all over the world to join this initiative, and participate in developing a People's Internet Manifesto.

Please contact us at secretariat@InternetSocialForum.net for further information or clarification.

Or the following regional contacts:

Download the press release in English, German, or Spanish.