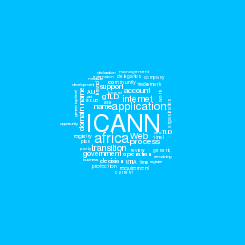 During the original WSIS process, Africa’s domain name situation was fairly dire. Most of its country code top level domains (ccTLDs) were not operated by entities within the African countries represented by the ccTLDs. During the preparatory process for WSIS, African governments recognised the need to develop capacity so the region could build and manage its own ICT infrastructure. Part of the ICT infrastructure identified as critical to the region’s economic development was related to the Internet. Following WSIS, in 2009, ministers of the member states of the African Union adopted the Oliver Tambo Declaration which, amongst other things, included a pledge to:

Work together to promote the use of Country Code Top Level Domains (ccTLDs) as they are a critical national resource whilst ensuring that the technical and administrative operations are at international standards to foster trust and use of African Domain Names in order to bring financial, economic and social-cultural benefits to Africa.

In 2010, the ministers adopted the Abuja Declaration, which requested the African Union Commission (AUC) to ‘set up the structure and modalities for the implementation of the DotAfrica project’. After calling for expressions of interest, the AUC chose a candidate to manage the .africa top level domain as part of the ICANN new gTLD (generic top level domain) programme. There was also another, competing, application for .africa from an individual, who set up a company for the purpose of the application. However, the top level domain was awarded to ZACR, a decision supported by over 60% of African Union members. As a result, the competing applicant submitted a request for an independent review panel (IRP) on the process used to select ZACR.

In the WSIS+10 side session, the AUC, ZACR and some of the African governments present expressed concern about how long the IRP was taking to reach a decision, stating that the panel seemed unaware of how governments worked as well as of the needs of the African Internet stakeholders. Frustration with ICANN was expressed a number of times. In response, Adiel Akplogan from ICANN clarified that the IRP was independent from ICANN – which was necessary if there was to be a non-biased party assessing how new gTLD applications were handled – and that ICANN was not in the position to dictate how quickly the panel should conclude. He did acknowledge that perhaps in the future, the community should examine the process, to ensure that it better meets their needs.

The side event concluded with Moctar Yedaly of the AUC urging that there be no extensions made to the IRP process, following the mid-January 2016 deadline for a final decision. He said that the speedy rollout of the .africa TLD is vital to Africa’s development needs.