This session was divided into four parts. The first part presented some general reflections and set the stage for the discussions. In the second part, parliamentarians presented a summary of thematic workshops that they attended during the IGF. These workshops covered the following topics: artificial intelligence (AI); international co-operation to secure an open and free Internet; secure critical infrastructures; how to keep and safeguard peace in the digital age; and, the digital age – is it democracy’s tool or trap? The third part identified key takeaways that could inspire greater national debates on digital issues. The fourth part was dedicated to an overview of the document ‘Messages from the meeting of Parliamentarians participating in the 14th UN Internet Governance Forum’.

Technology and democracy move at different speeds. While Internet-related developments happen very fast, legislators generally need some time to reach a mature level of debate in a democratic system. Moreover, parliamentarians need to find the balance between conflicting social values and policy options. Mr Thomas Jarzomek (Member of German Parliament and Economic Affairs Commissioner for the Digital Industry) cited the example of harmonising the right to be forgotten with the principles of transparency and access to information.

The free global Internet is facing serious threats. The first of these threats is related to fragmentation. Some countries are considering the option of operating a closed Internet, in which they construct barriers to the flow of information and the freedom of speech. The second is related to business models that undermine openness and innovation. The Internet was built on freedom and on open standards, and this environment has allowed companies to thrive. Nevertheless, large Internet companies are increasingly adopting proprietary standards that stifle innovation.

Mr Hansjörg Durz (Member of German Parliament and Deputy Chairman of the German Committee Digital Agenda) recognised that the Internet has not necessarily strengthened democracy as initially foreseen, and stressed the seriousness of the problem of misinformation.

The parliamentarians presented summaries of the workshops they attended during the IGF, clustered under five thematic areas:

Parliaments need to ensure that AI works in favor of democracy and liberal values, human rights, and sustainability, mentioned Dr Anna Christmann (Member of German Parliament). In order to achieve that, there is a need to build greater international agreement on shared standards, ethical values, and technological principles. These discussions should incorporate the principle of explainability and the need for awareness and capacity building. It is also important to determine in which fields AI is desirable, and in which fields there is a need to restrict or ban it, such as lethal autonomous weapons. States themselves should not only aim to be the leaders in the field of AI, but also to build common understanding with other governments.

Ms Alexandra Geese (Member of European Parliament) emphasised the issues of AI-based discrimination and bias, and the digital divide in access to AI technology. There was consensus that AI should be human-centric, foster sustainability, and respect ethical values and human rights.

International co-operation to secure an open and free Internet

With regard to access to connectivity, parliamentarians agreed that every human being should be able to connect to the Internet, particularly the poor. Poorer countries need support when it comes to building up their infrastructure, mentioned Mr Ulrich Lechte (Member of German Parliament). While some parliamentarians believe access to the Internet should be a human right, others said that the issue should be tackled by the market. There was general agreement that the Internet should remain unfragmented. In this context, some parliamentarians were against content restrictions and censorship, while others believe these policy options should remain available in order to preserve national security.

When it comes to taxation, parliamentarians agreed that the fair taxing of e-Commerce is necessary. All governments should have access to the tax revenue generated in their own countries. There is also a need for strong competition law, which would help prevent the formation of monopolies, and levels the playing field for all.

Parliamentarians agreed that privacy must be protected, and discussed the importance of end-to-end encryption. There were calls for supporting and joining the Council of Europe Convention on Cybercrime (the Budapest Convention).

Mr Leonid Levin (Member of Russian Parliament) highlighted the importance of digital sovereignty in countering new threats in cyberspace, from hacking attacks on financial, transportation, and other important infrastructures to cyber-bullying and attacks on personal data. When it comes to cybercrime, the Budapest convention remains relevant: However, a new convention is necessary in order to ensure the use of ICTs to fight cybercrime on a global scale, according to Levin. Blocking certain tools and content could be important to curb criminal activities.

Levin touched upon points related to the governance of the Internet and of emerging technologies. He suggested that the UN Resolutions on the Internet should be debated in IGF. The status of the IGF could be revised and turned into a platform that could issue binding UN documents. He also mentioned that the governance of AI should be discussed using a multi-stakeholder approach.

Discussions among parliamentarians about this topic were guided by the understanding that the open and free architecture of the Internet is essential for fair competition, innovation, and democracy. This architecture is under threat of fragmentation because some countries are considering the creation of closed national Internets. Attacks on critical infrastructure, such as energy supply systems, also pose a great danger to society. Due to such concerns, businesses and citizens could lose confidence in digital technologies, warned Ms Ronja Kemmer (Member of German Parliament). Confidence may also be eroded in situations in which democratic institutions are not strong enough, and in which security tools are misused by the state, mentioned Mr Charles Mok (Member of the Legislative Council, Hong Kong Special Administrative Region). 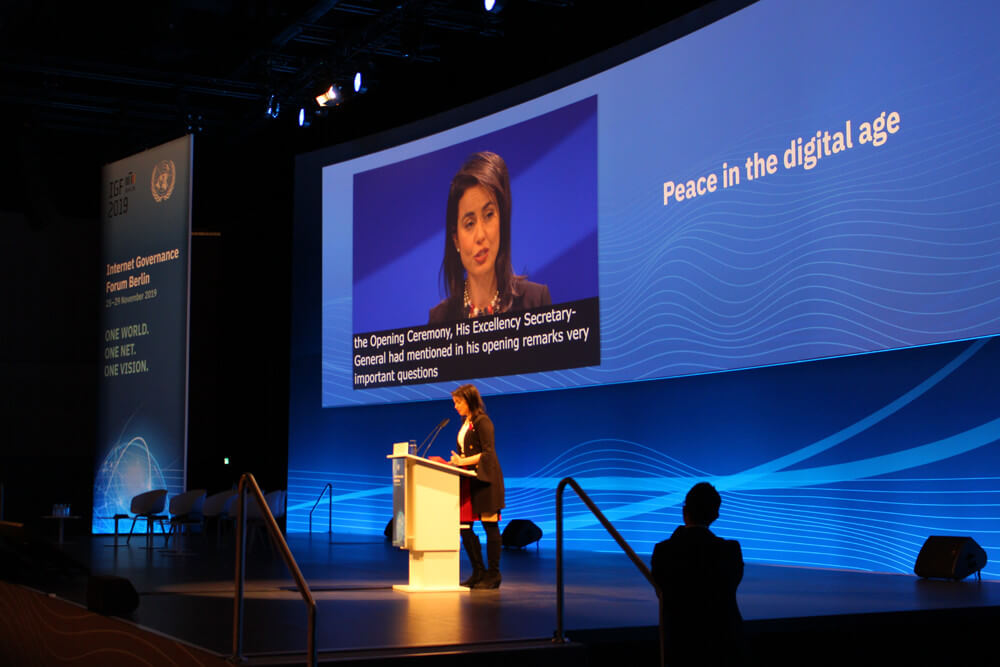 How to keep and safeguard peace in the digital age

Peace is being challenged by both governmental and non-governmental actors. Greater international norms and a human rights-based approach are necessary. According to research conducted by DiploFoundation, there is evidence and indications that more than 50 countries possess offensive cyber capabilities. Mr Falko Mohrs and Ms Marianne Azer (Members of Egyptian Parliament) stressed the need to develop metrics that will help quantify peace and conflict in cyberspace.

The digital age – is it democracy’s tool or trap?

Participants of this workshop paid special attention to the issue of electoral interference, sharing their experiences of their respective regulatory approaches to curb disinformation. At the same time, some parliamentarians called for attention to the potential misuse of these laws to stifle free speech and political dissent, especially in non-democratic countries.

Parliamentarians agreed that global antitrust regulations are insufficient to lessen the power of big tech companies and the problems of lock-in and network effects. Some possible solutions would be to break-up tech monopolies, to establish measures of forced interoperability, to create norms that request monopolies to open up and share non-personal data under their control, and to create a global not-for-profit social network.

Participants of this workshop concluded that governments are confronted with similar issues worldwide. They can learn from each other, but norms cannot be imported: Each country has its particular context and challenges. Norms that operate effectively in one country could be detrimental in another.

The third part of the session was dedicated to identifying key takeaways from the discussions among parliamentarians that could inspire greater national debates. The moderator of the session, Mr Thomas Schneider (Ambassador and Director of International Relations at the Swiss Federal Office of Communications), proposed the following questions for debate: What did you learn as Parliamentarians?; What did you experience as new information, and which new insights will you take home and feed into discussions in your parliaments with your colleagues?; and, c) Was there something further that should have been discussed? Participants highlighted that the discussion on how to maintain a free, open, and unfragmented Internet was very fruitful, as it is dependent on policy decisions that are being made by governments worldwide. They also emphasised the interdependency among different Internet policy issues, calling on the Internet to be dealt with as an ecosystem.

Parliamentarians also discussed how to continue to work together, and how to bridge and build trust among all stakeholders. Some concrete suggestions were made in this regard:

Language barriers that prevent full participation were highlighted during the question and answer period. Solutions to this issue include: Ensuring common understanding of the meaning of certain expressions related to digital policy issues, translating technical jargon into language that policymakers can more easily understand, and providing translations of discussions and materials in a variety of different languages.

To conclude the session, an overview of the document ‘Messages from the meeting of Parliamentarians participating in the 14th UN Internet Governance Forum‘ was presented by mr Wolfgang Kleinwächter (Global Commission on the Stability of Cyberspace). The document is structured in three parts: a) a preamble, which highlights the need to balance conflicting policy interests; b) references to relevant pre-existing documents; and, c) an operational section that includes concrete recommendations. The document was named the ‘Jimmy Schulz Call’ as a tribute to the work of German Parliamentarian Jimmy Schulz, who recently passed away.